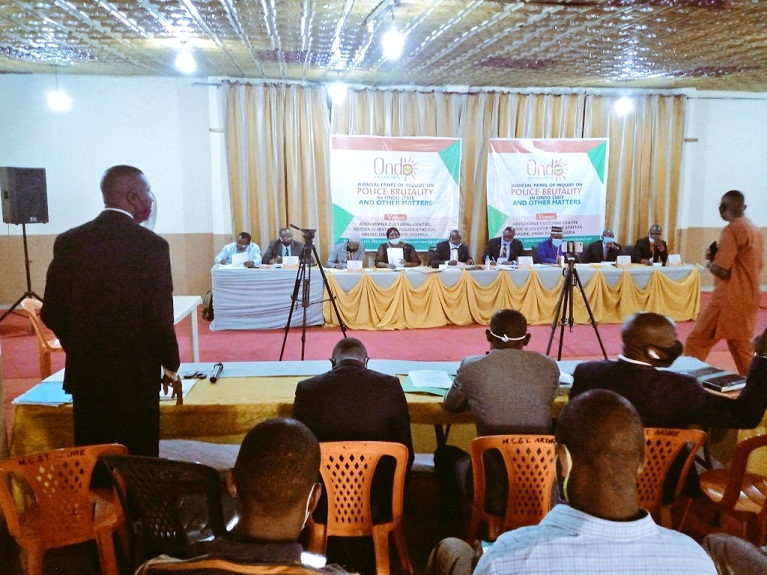 The Ondo State Judiciary has approached the Judicial Panel of Enquiry on Police Brutality in Ondo state and Other Matters, sitting in Akure for compensation over looting, destruction, burning and vandalisation of its facilities in some courts across the state, during the EndSARS protest last October.
Giving details of the affected facilities at the panel sitting yesterday, the Chief Registrar of the State Judiciary, Mrs Bolatito Ajibade said the vandalised property are located at the State Judiciary Headquarters, Family High Court, Family Magistrate Court, Multidoor Court House and Chief Magistrate Court Complex all in Akure.
Others are Chief Magistrate Court, Osi, sitting in Akure, Chief Magistrate Courts 1 & 2, Ore, Chief Magistrate Courts 1 & 2, Rent Tribunal and Customary Court in Okitipupa.
Mrs Ajibade noted that a bill of quantity, hard and soft copies of exhibits had been submitted on each facility destroyed together with the petition.
The Chairman of the Judicial Panel, Justice Adesola Sidiq (Rtd) noted that the panel would visit the vandalised facilities to ascertain the damage done before hearing.
Sequel to this, the case was adjourned till January 26 for a visit to the vandalised facilities at Okitipupa.
In other cases called at the sitting yesterday, counsel to Mr Oladele Femi Alago was absent. Justice Sidiq however advised the petitioner to prepare for hearing on Thursday, January 21.
The petition filed by Pastor Johnson Tanimola on wanton destruction of property in his care was adjourned till today for his counsel to regularise his petition for hearing
The case involving Michael Ogunleye and the defunct Special Anti-Robbery Squad (SARS) operatives was adjourned till January 28.
Justice Sidiq informed the sitting that hearing notice would be served on the respondent regarding the date.
Two petitioners, Chief Alayide Adelami and Sergeant Phillip Apata and their counsels were unavailable at the sitting. Their cases were adjourned till February 2, 2021.
Justice Sidiq directed the Secretary to the Judicial Panel to inform the counsels of the new date.