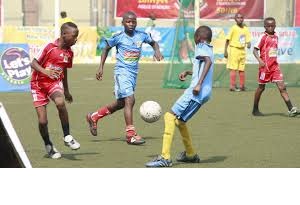 From Jimoh Ahmed, Ikare Akoko.
\
Football and other sports lovers in Akoko area have challenged government at all levels to do more to make the sports sector an avenue to engage  teeming unemployed youths who are roaming about and indulging in crimes.

The duo of Teddy Ojuolape from Ikare Akoko and Aliu Ogunleye from Afin Akoko gave this challenge in separate interviews with The Hope.

The posited that sports remains a huge avenue to create jobs for the teeming youths who are mostly unemployed in the country.

According to them, testimonies abound with the high numbers of successful footballers and sports men and women both in Nigeria and around the globe.

Meanwhile they have appealed to the Ondo State Government to repair revamp all the city stadia spread across the state to further engage youths in the sunshine state.

They were of the opinion that if all the stadia located in Ikare, Okitipupa, Ondo and Owo are renovated, grassroots sports activities will be further boosted thereby serving as grounds for catching young and hidden talents.

They also called for the revival of the schools’ sports that which had been the source of getting talents in the past.

They appealed to the Ondo State Government to always make provision for a bigger budget in sports sector to in its annual budget plan.

Similarly they called for the recruitment of sports organisers to man sports in each local government and also more coaches to handle and train more talents that will bring national and international honours to the state.