‘Environment protection should be prioritised’ 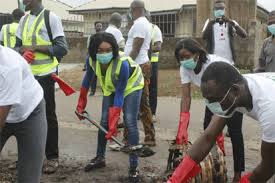 Kemi Olatunde
|
Commissioner for Environment in Ondo State, Mr. Funso Esan has called on stakeholders to give priority to the  protection of the environmental  and  security issues in order to guarantee sustainable development in Nigeria.

He made the call during the week at the 12th technical meeting of the National Council on Environment (NCE) in Akure, the state capital.

According to him, it is important that the environment and its resources are managed in ways that could facilitate sustainable national socio-economic development saying “it is therefore pertinent to mainstream environment into all sectors of the economy as a cross cutting issue in development.”

The host commissioner while speaking further hinted that the NCE aim to tackle environmental threats such as flooding, earthquake, deforestation and degradation of the ecosystem, and also save mankind from the consequences of environmental disasters.

He said that the NCE meeting has provided the opportunity for members to tackle and proffer solutions to emerging environmental challenges as well as celebrate their achievements.

While speaking on the theme of the meeting; “Environment and Security: Consolidating Nigeria’s Environment Sector Reforms Towards Sustainable Development” he noted that the critical role of the environment in socio-economic development of any nation cannot be overemphasized saying “the environment provides space for all human and development activities, thus man relies on the environment for his survival and sustainability.”

However, Esan called on Federal Ministry of Environment to encourage states of the country to accord the sector its desired importance, saying “many of the state executives in Nigeria appear not to be environment friendly as they do not give priority to the issue of environment as globally required especially by United Nations.”

In his remarks, Permanent Secretary, Federal Ministry of Environment, Mr. Lawrence Leon Aliboh while welcoming the various technical teams from both federal and state government agencies, described the theme as apt due to the increased environmental challenges confronting the nation which according to him is not devoid of contending and misuse of the environment.

Speaking further he said; “an immediate case in point is the avoidable herders-farmers conflict that is being accentuated by resource use challenges, where the environment sector stands to play a key role in its resolution.”

Describing NCE as the highest policy making body for the environment sector in the country, he however called on members to make meaningful contributions capable of moving the sector forward.

He said; “I therefore urge all to take this assignment seriously as one of the critical challenges facing the sector is the non-appreciation due to inadequate sensitisation of its contribution to national development and human well being because the average Nigerian sees the environment as God given without appreciating the need to nurture it not only for today but also for our future generations.