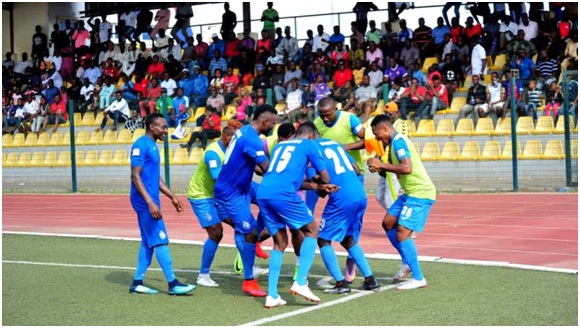 Enyimba FC of Aba and Rivers United of Port Harcourt have qualifed for the next round of CAF Champion Leauge preliminaries.
Enyimba battled to a 1-1 draw with Rahimo FC in the second leg of the CAF Champions League preliminary game in Aba.
Enyimba walked a tight rope but held on to win 2-1 on aggregate.
View pictures in App save up to 80% data.
While Rivers United defeated Futuro Kings 2-1 at the Yakubu Gowon Stadium ,Port Harcourt to end the match 3 – 3 on aggregate before dumping out them out 2-0 in a penalty shootout.
The People’s Elephant started the game well and pressed for an opener but failed to find a breakthrough. They had their first chance in the first minute when Anayo moved past his marker into the box and crossed to Omoyele who missed to connect to the pass. In the 4th minute, Sadiq Abubakar’s cross met Omoyele but he collided with Traore in goal for Rahimo
Omoyele once got another opportunity to put Enyimba ahead in the 11th minute but he shot straight at a player. There were series of misses for Enyimba
Enyimba continued to miss chances in the first half and pressed for an opener, with goalkeeper, Olufemi Kayode not tested in the first half
Rahimo got their first real chance of the game but Komi shot wide from outside the box when he pounced on a lose ball.
Victor Mboama came on for Omoyele and had an impact as he had his chances.
Enyimba’s moment of glory came in the 60th minute when Austin Oladapo unleashed a ferocious trademark shot from outside the box.
Olufemi Kayode kept Enyimba in the game in the 64th minute when he stretched to keep out Guira’s sublime header. Kayode tipped a free-kick over the bar in the 72nd minute but failed to cover himself in glory in the 74th minute when substitute, Papa Wara moved past Enyimba defenders and struck a fine shot but Kayode handled it badly and it was 1-1
Enyimba had their backs against the wall and defended well to the end.