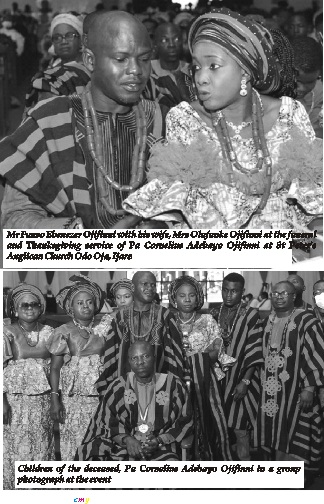 People from all walks of life gathered in their large number to celebrate the life and time of late Pa Cornelius Adebayo Ojifinni at his country home.
The church service was held at the St Peter’s Anglican Church Odo Oja Street Ijare, in Ifedore Local government area of Ondo State.
Speaking about the deceased, Mr Funso Ebenezer Ojifinni, eulogised his father particularly on his immense contribution to his children development and the entire Ijare community, a feat he said could not be forgotten easily.
He said while Baba was alive, he made positive impact in the life of everyone around him, to the extent that he became rallying point for others.
“At old age, baba was strong without any ailment and could see clearly without using glasses”.
Baba’s death is a big loss not only to his immediate family but more to the Ijare community as a whole, if you know him you will know that 1000 years with him is like a day, because he tutored all his children from birth till his last breath.
“My father was a mentor, role model and great adviser,” he said that it was very difficult to believe that his father is no more, saying he had left a vacuum that is too hard to fill.
He appealed to parents to train their wards in the best way so as to be a better person in the future.
Dr Olorunfemi Owa, Baba’s son in-law said the deceased was a very good father-in-law who did not allow any of his in-laws to be called in-law but his own biological sons.
Baba was loving, disciplined and would not hide under any pretence notto say the truth no matter whose ox is gored and very conservative.
Baba through dint of hard work was not just a successful family man but produced doctor, lawyer, pharmacist and the likes.
Earlier in his sermon, Venerable Olusegun Olorunfemi Osotayo, read Revelation 21:27, where he emphasized the need for Christians to always think about the new Jerusalem which he said is heavenly kingdom.
“It is only the true Israelites who have been redeemed by the blood of Jesus without any condemnation that will enter into the new Jerusalem”.
He said in the new Jerusalem there will be no night, day, rain or sunshine, there everything will be perfect before God who resides in the new Jerusalem.
He charged Christians to live a holy and godly life because no unclean things will enter the new Jerusalem.
He encouraged believers to emulate the lifestyle of Pa Cornelius Adebayo Ojifinni, his philanthropic gestures and kindness towards people.