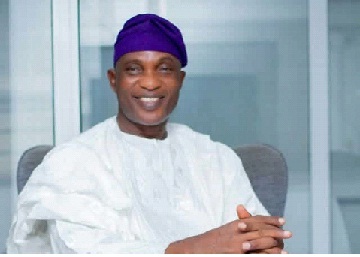 The candidate of the Action Democratic Party, ADP, in the 2018 governorship Election in Osun State, Alhaji Moshood Adeoti, has returned to ruling All Progressives Congress, APC.
He formally defected to APC with thousands of his supporters including some notable members of the ADP who have been paddling the canoe of the party before he joined them.
He moved to the ADP as an aftermath of the crisis that broke out during the APC governorship primary in the state.
While officially announcing his defection to his former party, Adeoti said he had suffered so much for the party, recalling that he was jailed thrice because of the party, and nobody would pray for the house he built to collapse.
Adeoti noted that apart from the fact that he is a core member of the progressive party, he has no choice than to go back to his former party consedering appeals and number of persuasion he had received from the leadership of the party both in the state and at the national level.
The former SSG who said some notable party leaders among whom are the Vice President Yemi Osinbajo and Asiwaju Bola Tinubu have persuaded him to return to the party added that he was going back to the party to resolve the internal crises within the party.
“We made history in a way, in view of the number of votes (49,742) garnered, despite having barely less than two months to prepare for an election of such magnitude.
“The result of the efforts of the likes of the former governor and pioneer National Chairman of the APC, Chief Adebisi Akande, immediate-past governor of the state and incumbent Minister for Interior, Ogbeni Rauf Adesoji Aregbesola and members of the State Elders Forum led by the former Secretary to the State Government, Chief Sola Akinwumi is what we are all witnessing today.
“It must not also go without particularly mentioning the numerous efforts made by the current Governor of the State, Alhaji Isiaka Gboyega Oyetola, who in spite of his very busy schedule, tirelessly mounted pressure on me and my supporters through telephone calls and personal visit to my residence in lwo, in company of the APC State Chairman, Prince Gboyega Famoodun and Alhaji Razak Salinsile, the state Secretary of the APC, on the need for us to return to the All Progressives Congress, where he said we rightly belong”, he stressed.