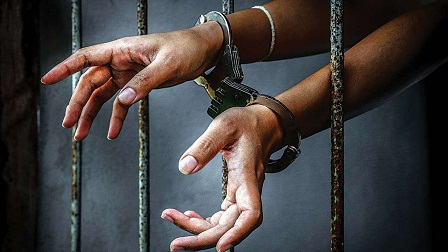 By Micheal Ofulue
|
Two ex-convicts, identified as Tunde Akinwumi, 20, and Tunde Akinboyewa, 25, who allegedly conspired to rape a 18-year-old lady and a 14-year-old girl in Ondo West Local Government Area of the state have been arrested.

The Hope Metro gathered that the suspects, allegedly locked the victims inside a house and raped them.

The victims, according to the Police First Information Report (FIR) were reportedly locked inside a house and raped by the two men who also were later discovered to be members of a cult group in the town.

The Hope Metro learnt that policemen at Area Commander’s office in Ondo had received information that cultists numbering about five had allegedly abducted two young girls between  the ages of 18 and 14 respectively.

It was learnt that the police swung into action and trailed the suspects to a house where they reportedly gang-raped the innocent victims, who were in a state of coma.

The police  arrested two suspects, consequently rescued the victims, while the other cultists escaped.

The Ondo State Commissioner of Police, Mr Undie Adie, who confirmed the arrest of the suspects said investigation conducted by the police later revealed that the suspects were ex-convicts and habitual criminals.

Undie hinted that some items like one UTC stainless knife, one red Beret cap of a cult group by name ‘PIECE’  mobile phone, jean jacket stolen from one Mr Farouk, were recovered from the house when the unfortunate incident took place.

In a chat with The Hope Metro, one of the suspects who identified himself as  Tunde Akinwumi, said they picked the victims from a night club to  his house where they reportedly engaged them in marathon sex throughout the night till daybreak.

His words,” My colleague and I picked the ladies from a night club in the night and took them to the house and have canal knowledge with them. I would not lie, we fucked them very well that night till day break.

On whether they paid the ladies stipends after the marathon sex Akinwumi said they had not given them a dime before hands of the law caught up with them..

The police boss, who advised parents to properly take adequate care of their children disclosed that the suspects would be charged to court  soon after the police conclude their investigations.

He  warned criminal elements in the state  to have a rethink or be ready to face the full weight of the law.