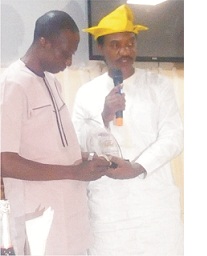 By Femi Atolagbe
|
The immediate past Chairman of Sports Writers Association of Nigeria Ondo State chapter (SWAN), Mr Akintunde Akinsemola has been awarded SouthWest Sports Personality of the Year.

The award ceremony that was held at the International event center , the dome, Akure, the state capital was put together by Heralds Magazine .

Akinsemola during an interview with journalists said he was elated and feels great to be so honoured with the award.

He added that the award will spur him to do more on the job, advised fellow journalists not to pay premium on money above their professional calling.

He said, “make a difference on the field ,money will later come , that has been my guiding principle.