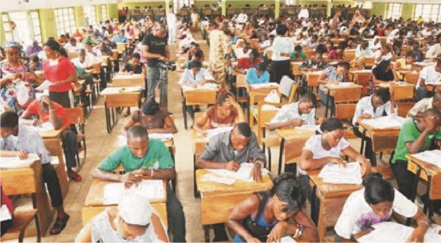 By Bisi Olominu
|
Education serves as a prime instrument in the development of any nation but the issue of examination malpractice has constituted a barrier to the problem of this section. Nigeria’s education system is on the verge of collapse as teachers, parents and students now synergise to cheat during examination. Before this time, it was only students that cheated during examination, but to attract students to their schools, proprietors have joined the menace, parents now entice teachers and school proprietors with money to help their wards while university lecturers now lure students with sex to get  unmerited marks.

The main purpose of examination is to measure knowledge acquired and towards quality control of the curriculum and its delivery, monitoring of educational standards and the assessment of schools effectiveness.

However, the occurrence of examination malpractice at any level of educational system renders certificates useless.

The danger of examination malpractice is not a recent phenomenon neither is it peculiar to tertiary level. It has been with us in Nigeria for a long time and has now almost assumed an epidemic influence. The phenomenon increases in number, scope, and complexity.

The menace has now been taken to a high level especially during JAMB examination as professor, master degree holders and undergraduates of universities invade examination halls to lend helping hands to their wards.

The document revealed that arrest were made in 23 states out of the 36 states in Nigeria. Other states where high tech malpractices occurred were Edo, Ebonyi, Bayelsa, Bornu, Kaduna, Adamawa, Rivers, Kwara, Ekiti, Gombe, Plateau among others.

Speaking on the menace, Ondo State Chairman of Nigeria Union of Teachers, NUT, Comrade Oladele Amoko said the trend would continue as  government at all levels have failed to heed to the call of the union to employ only professional teachers in schools in the country.

He said, “where you have teachers in passing”, who entered the profession not for the love of it but because of lack of job now teaching in our schools, such could not but happened.

His words: ” Our union has notified government on how to curb the menace, but it seems as if it would not listen. We have called the attention of government to those being employed who are not professional teachers but joined the profession because of the unemployment issue in the country.”

” A well trained and professional teachers would not engage in examination malpractice. Go and check those involved, they are not real teachers but those for lack of job entered the profession. They can do anything for money and since they are not professionals, they must have something to argument what they are earning now. They are the one engaging in the act, they are the ones acting as mercenaries in schools for monetary gains and many of them are even taking advantage of the students.”

Amoko said to stop the trend, government must be ready to fight the scourge by working in unison with NUT to recruit real professional teachers in schools in the country.

A retired teacher now a community leader in Akure, Mr Adekunle Ojo while contributing to the issue said in his time, examination malpractice was not as rampart as it is nowadays.

According to him, it was reduced to barest minimum in his time but now, it has reached an alarming stage as teachers, students and parents are involved.

Hear him,” The way things are going, I think examination malpractice will totally destroy our education. The way and manner students cheat during examination is alarming, even parents and teachers have joined just to make monetary gains and sure that their wards pass examination.”

“It is high time that government took decisive decision on this. Anyone caught must be made to face the music. You won’t believe that sons and daughters of those in government are mostly involved in this menace, which is why it has become difficult for it to be eradicated. If government can clamp down on those cheating during examination, expel them from school, blacklist them from gaining admission to any school you will see that the menace will stop. But we are still paying lip service to the issue, reason it is spreading like wide fire”.

A parent, Mrs Funmilayo Olaribigbe is of the opinion that government in the country has not done much to curb the trend. She is of the reason that if some parents sending their wards to ” miracle centres”, those paying heavily to teachers to help their children and the teachers involved had been dealt with accordingly, the trend would have stopped.

She also said the loopholes in the country’s law are making many students to engage in examination malpractice.

” Someone will cheat during examination, he or she will be sentenced to one year jail term or not sentence at all, and you want examination malpractice to be eradicated. Let government do the needful by reviewing the law inherited from our colonial master which we are still using.

“Let those caught cheating be sentenced to about fourteen years in jail or more to serve as deterrent to others.

“Until we do the needful, the trend would continue. If our government is not government of cheat, it will put drastic measure in place now to stop the sinking ship in our education sector”.