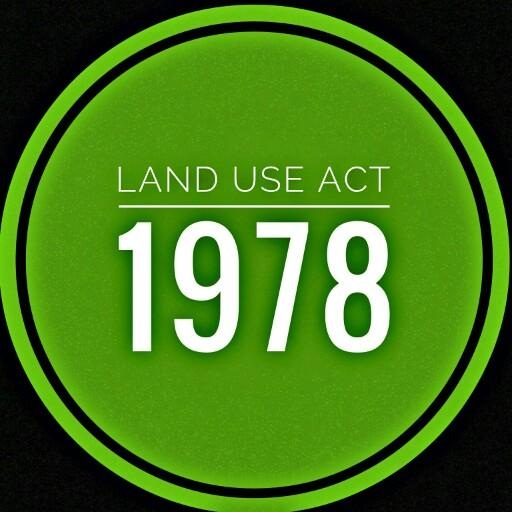 The decision of the Federal Government to review the Land Use Act is not resonating well with experts, findings by The Hope have revealed.

Investigation by our reporters showed that many people are distrustful of the true intention of the federal government in revisiting the Act.

The Land Use Act which was promulgated by the military regime in 1970 was meant to correct some of the problems with the existing land tenure in the country, majorly to provide a uniform land tenure system and ensure equitable access to land for productive process.

The decision of the federal government to tinker with the controversial Land Use Act was given recently by a Director in the federal ministry of works and Housing, Godwin Ityoachimin at the 27th conference of lands.

However, land experts hold contrary views and strongly suspect that the intention of the federal government was political.

Godwin in a speech at the Director of Lands conference said the review was necessary in order to resolve the numerous frictions between state and federal governments on land administration which he insisted was making it difficult for the federal government to fulfill its obligation on housing.

Speaking from the perspective of an Urban and Regional Planner, Prof. Julius Olujimi said the allegations of the Federal Government against the state government is baseless, stressing that state government has never stopped federal government from using their lands.

Speaking from the legal perspective, Professor of Law, Adekunle Ajasin University Akungba Akoko, Prof. Olubayo Oluduro said it will be a great anomaly for the Federal Government to say it want to take the ownership of land from the state.

“It will be a great contradiction to the principle of Federalism if the federal government decides to take over ownership of states’ land.

“When you look at the Section 43 and 44 of the constitution of the Federal Republic of Nigeria, the ownership of mineral resources everywhere in Nigeria is vested in the hands of the Federal Government which has been a controversial issue in Nigeria.

Professor James Okunlola differentiated between land tenure and land ownership, stressing that the provisions of the 1978 Land Use Act is clear on land ownership.

“What lead to the Land Use Act was because many people wanted to go into commercial Agriculture but they were restricted by culture and tradition. In view of this, it was not always easy to acquire land.

“One of the things to be realised is that we cannot consider everything to be a federated issue. Already, so much power has been concentrated in the federal government, adding land ownership to this again will be a misplaced priority.

“This is why everyone is talking about restructuring in Nigeria. The state and local governments must be recognized because they are closer to the people and land belongs to the people as a matter of fact.”

Political analyst and an Associate Professor, Department of Political Science, Adekunle Ajasin University Akungba Akoko Dr Bayo Fasunwon said the intention of the government is highly political and should be subjected to questioning.

“Federal government’s intention is political and can be traced to the intention to cede lands to the Fulanis in every part of Nigeria. They are only seeking a seemingly legalisation of illegality.

“They must categorically explain what it means by ‘misuse’ of land. Let there be true Federalism and the issue of land ownership would be solved.

“The reality is that land is held by State governments for their citizens, for planning, allocation, protection and development purposes. State Governments should rather be encouraged to allocate lands judiciously and for productive purposes.”

A Lagos based legal practitioner, Akande Akinsanmi said to his best of knowledge, the 1978 Land Use Act is still the best land reform which should not be jettisoned.