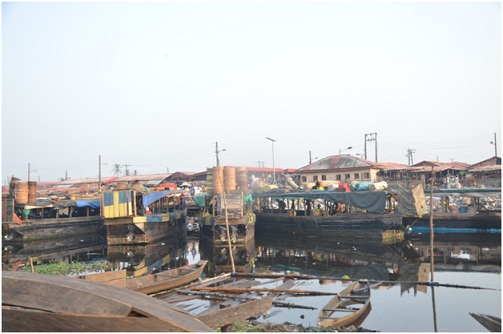 Years ago, at least a hundred boats visited the Igbokoda International Market during market days, but when The Hope came to town on the market day on December 30, these were the few boats available. Photo: Eddie Agofure.

(This story was produced in partnership with the Pulitzer Center)

One December evening at the coastal Nigerian town of Ayetoro in IIaje Local Government Area of Ondo State, thirty-year-old Titus Oladele finished his day’s mission sitting in his motorized boat, purchased five years ago. Armed with an old net, buckets, and a long stick, and surrounded by fellow fishermen, he stares ahead of him at the Atlantic Ocean. Titus lives where three crises meet: global warming, diminishing fish catch, and climate change. He, like 1.5 million Nigerian fishermen, finds himself trapped in the extinction threat to 92 fish species. The extinction threat to fish species, as well as the disappearance of species, forces Titus to fish further into the ocean, at the risk of many challenges.

Today, he leads a pack of men who gather round his boat on the rundown pier at Ayetoro. The men stare with despair at their catch: a mixture of wretched-looking fish, plastic, and trash, a regular fate of Nigerian fishermen, who form an estimated two percent of Nigeria’s population. One by one, the men separate fish from the trash and plastic.

“There is no fish,” Oladele says with despair. Croaker used to swim around the coast, the same with shawa (herring), alarun (macherel), eja ojiji (Electric fish), panla (hake), Oladele says, but things have changed.

Things have changed, and fishermen who caught different types of fish species twenty years ago now catch just five species today, and the catch might include plastic and other forms of trash. For some of Oladele’s fellow fishermen, grim looks always fill their faces, especially those with wives and lots of children to feed.

The fish extinction, which became noticeable about ten years ago, is expected to worsen, exacerbated by climate change, said Prof. Chioma Nzeh, of  the Department of Zoology, University of Ilorin, who predicted extinction to happen by 2048. The fish extinction story involves 15 endangered, 48 critically endangered, five vulnerable, and 24 near threatened species, according to Emmanuel Asuquo, a lead author of a paper titled Threatened and Endangered Fish species in Nigeria, A Menace to Biodiversity-A Review. The rate of extinction already forms a subject of research, with a combined loss of 5.94 percent in species of fish, decapods crustaceans, and vascular plants in Ondo State between 2008 and 2018, wrote Olusola Popoola  of Federal University of Technology, Akure, in a study published on ResearchGate titled Assessment of the Implications of Biodiversity Change in the Coastal Areas of Ondo State, Nigeria.

Unfortunately, a relationship exists between the extinction of fish and the means of livelihood of people living in the coastal areas of Ondo State, wrote Popoola. Seventy-nine percent of respondents in his research claimed that the loss affected their livelihoods, through a reduction in their purchasing power, with fishermen taking five rather than the former two years to put up a building. Fishermen and women made N30,000 per day five to six years ago, but now, they struggle to make N1,000 per day, says Akinrunta Emilere, a fisherman from Igbokoda Zion.

Due to the extinction in IIaje and other places in Nigeria, fish production in the country only hits 1.2 million metric tons (MMT) through artisanal, industrial, and aquaculture, whereas the nation requires 3.6 MMT per annum to meet its fish demand, said Ime Umoh, the Director, Federal Department of Fisheries. A reduction in the nation’s fish production could suffer another setback by 2050, with a 53 percent drop expected by the World Bank, as the volume of fish available for consumption in Sub-Saharan Africa is projected to decline at an annual rate of one percent, or 5.6 kilograms per person per year by 2030, causing a ripple effect for communities like those in IIaje relying on fishing for food, jobs, and wealth creation.

The ripple effect of fish production decline in IIaje and other places could exacerbate the pressure caused by the reduction in people’s purchasing powers, and no hope could be in sight, as the fish extinction noticeable about ten years ago worsens into the future through the menace caused by climate change.

Sufferings of the People

Titus Oladele used to be a full-time fisherman, but due to the decline in fish catch in the past ten years, he engages in other livelihood activities not connected to fishing, such as local politics, to keep body and soul together. Researchers say the fish disappearance and extinction could chase more fishermen into taking the choices Oladele makes. Oladele’s family once enjoyed three meals a day: succulent fish from the nearby freshwater and the ocean, but meal now consists of small fish, meager rice and yam, now expensive and little.

Margaret Agamuyi, a fish monger and one of Oladele’s customers, also feels the pinch. Before, she sold large quantities of carp (Cyprinus carpio), killfish (Fundulus heteroclitus), perch (Perca fluviatilis), sawfish (Pristidae), catfish (siluriformes), and others, but with the disappearance and extinction of these fish species, her business nosedived, and she struggles to make ends meet, just like many other fishmongers and fishermen in IIaje and other places. “Before on a market day, up to one hundred boats come to Igbokoda, but now, not much come to bring fish they killed,” says Margaret.

Instances of nets and boats cast aside dot fishing communities at Igbokoda. When combined with the disappearance or extinction of fish species such as carp, killfish, and perch, a story of desperation begins to unfold. The desperation forces many of the fishermen to cast aside their fishing for means to gain quick money for their survival, as the effects of climate change worsen.

Nigeria’s gas removal fell by 23 percent from 2000 to 2017, while its emission rose by 46 percent in the same period, according to data from Nigeria’s first Greenhouse Gas Inventory published in March 2021. Meanwhile, temperature sees increases of 0.03 degrees Centigrade per decade in Nigeria, with stronger increases of 0.19 degrees Centigrade per decade taking place over the last 30 years, said the Vanguard, quoting figures from the Climate Change Knowledge Portal.

Rainfall and humidity underwent changes over the past ten years in Nigeria. Between 2003 and 2013 for example, the amount of rainfall increased by 342.2 mm, while a decrease in the amount of humidity took place, a situation complicated by an increase in temperature by 1.5 degrees Centigrade, wrote Ikechukwu Elenwo, in a study published on Scientific Research  Open Access.

With the sea making incursions inland, its rising temperatures affected the characteristic and nature of coastal waters, creating a situation unpalatable to the existence of at least 104 species on the coast, wrote Joseph Ipinjolu and others on Journal of Fisheries and Aquatic Science, in a study titled Potential Impact of Climate Change on Fisheries and Aquaculture in Nigeria.  Also, with the incursion into the coast, saltwater spills into inland water bodies, increasing their salinity, ultimately endangering the 46 families of fish recovered in the freshwater sector, wrote Chukwu Okeah, in a study titled Impact of Coastal Flooding on Brass, Niger Delta Nigeria. The endangering of the fish species completes a circle started by climate change, in turn induced by temperature increases and the rise in the emissions of greenhouse gases, through the incursion of sea water into the territory of freshwater fishes.

The fish market at Igbokoda International Market looked desolate, when the Hope came visiting. Abandoned fishing boats lay near the pier, overtaken by weeds and algae. Made redundant by the decline in the fish trade, men sat on chairs on the pier, doing nothing. The boat yard at Igbokoda looked decrepit, in contrast to the situation years ago. Traders jacked up fish prices over 200 percent in six years, due to the shrinking fish production.

Agamuyi tells this reporter a decline occurred in their standard of living as a result of the downturn. Down the road leading to the market, some fish stalls remained, but the prices of fish escalated, with fishermen forced to catch fingerlings following the extinction or disappearance of fish. Before, fishmongers left neighboring towns such as Igbobini, Okitipupa, and others to buy fish near the Atlantic Ocean, but many have stopped the practice. One of Oladele’s customers, Mabel Mobolanle, got struck with a strange illness, and having become unemployed due to the fish scarcity, she stays at home, unable to afford proper medical treatment.

With the downturn in the fishing sector and unemployment becoming rife due to the scarcity of fish, women become victims. “The women trade in ocean products in fish and shrimps that men bring from the ocean, and virtually 80 percent of IIaje women live on this, so when there’s problem with fish, they must be affected, said Sola Ebiseni, former Chairman of IIaje Local Government, to Daily Trust.

Ayetoro used to be one of the premier fishing towns along the Ondo State coast, but now, it lies below the sea level, a hot spot of sea surges induced by the climate change. The distance between Ayetoro and the Atlantic Ocean used to be some three kilometers two decades ago, said Kinga Olumide Cladius, Director, Department of Ecology, Ondo State Ministry of Environment, but today, the sea overtakes the town. As a result of the climate change-induced sea surges, wastes from nearby oil companies pour into the fresh water sources of Ayetoro and neighboring communities, further causing either the disappearance or extinction of fishes, wrote S.O. Balogun, in a study titled Effects of Oil Spillage on Aquatic Environment in IIaje community.

Decision-makers should plan policies that will incorporate the delicate nature of biodiversity into spatial planning processes, especially for the ecologically sensitive areas like the coastal areas in Ondo State, said Popoola. In addition, government’s laws and policies should be made to protect water bodies, by educating the people, while the people should put pressure on government agencies and politicians by writing and calling them and voting only those who show commitment to saving water bodies and biodiversity, said Asuquo.  Everybody should show commitments to water bodies and biodiversity, before fish becomes extinct altogether in this part of the world.

This story was published in partnership with Pulitzer Center, Washington D.C., United States