FA Cup: We will turn the tide this season – Ogbebor 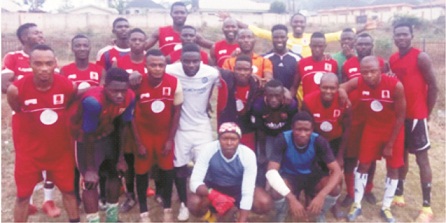 He disclosed this to  Sporting Hope at the team’s training field in Ijapo, Housing field in Akure the state Capital, adding that  “our major focus this year is how to perform creditably well in this year’s FA cup”.

Ogbebor emphasised that there are numerous talents in Ijapo, Alagbaka ,Fiwasaye axis which we are ready to showcase to the world during the FA cup competition.

According to him, “we are in serious preparation for the competition this season, we have resumed training since 6th January this year. Initially our training was thrice in a week”.

“But for the purpose of the forthcoming competition we have removed the toga of three times in week training and start everyday training .”

“He averred that as a Footballer that wants to make head way in any club within and outside the shore of the country must have to be physically ,mentally ,emotionally fit and ready to row”, he said.

“That is why we are training every day “

The head Coach added further that his team is not going to the competition to make a number but to be a team to reckon with in term of performance.

With the enthusiasm in our training and fitness of our lads , we are hoping to get to Semi final in this years FA Cup .

It would be recalled that EES -Snippers FC was knocked out at the quarter final of the competition last season by the darling team of the State, Sunshine Stars FC by 2-1 at the Sports complex in Akure .

He said , “the match against Sunshine Stars was a good learning point for his team, we learn a lot from the match. And for the boys ,it gave them lot of confidence to believe that they too can get to a greater height in their football career.

“We enjoined our numerous fans to continue praying for us , let them continue to believe in us , we will continue to make them proud.

We are going all out to tell the world once again that good football resides in Ijapo estate”.