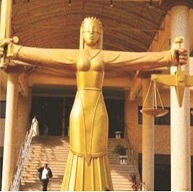 Victor Akinkuolie, Ado-Ekiti
|
The Ekiti State Police Command has confirmed the arrest of a 33-year-old man, Adeyemi Eniola for allegedly parading himself as a lawyer in Ado-Ekiti, the state capital.

According to the Police Public Relations Officer in the command, Mr. Caleb Ikechukwu, the suspect, a native of Ayetoro-Gbede, Yagba Local Government Area of Kogi State, recently posted the picture of himself on the social media (Facebook) and claimed to be a legal practitioner, dressed in a lawyer’s regalia, which he used as a display profile.

The police spokesman added that the suspect also falsefully presented himself as the coordinator of a Non-Governmental Organisation (NGO) and pretended to be rendering legal services to the unsuspecting members of the public.

Ikechukwu said during the interrogation, the suspect confirmed to have defrauded several persons of their money and other valuable goods.

He was said to have mentioned those he had duped to include one Miss Safurat Buhari, a corps member, one Mr. Steve Rose and also one Mrs. Oke Bamidele, to mention a few.

”Some other persons paid several thousands of naira to this self acclaimed lawyer under the pretence of assisting them through the NGO,he added.

He said the suspect who is currently in the custody of the police, and assisting them on the matter, would be charge to court as soon as investigation is completed on the matter.

The PPRO warned,”Members of the public are hereby advised to avoid interacting or communicating with strange people on social media platforms, as they may become victim to such cyber crime identify thieves and frauster.

“The Commissioner of Police Ekiti State Command, Mr. Amba Azukwo, wish to assure the good people of Ekiti State of the Command firm commitment to sustain the war against crimes in furtherance to our goal to guarantee the safety and security of Ekiti State,” he stated.