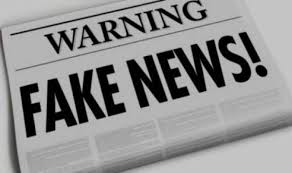 From Fisayo Akinduro, Osogbo
|
Journalists and media houses in Nigeria have been urged to be watchful of fake news and hate speeches in order to avoid the collapse of the media.

This call was made by a guest lecturer, Dr. Joseph Obasanjo, from Bowen University during a stakeholders summit on “Fake News and Hate Speeches in Election: A Possible Havoc in Developing Democracy”, in Osogbo on Tuesday.

He described the trend of fake news and hate speeches as worrisome and if not curtailed, may cause crisis in the country.

Obasanjo said the media lacks gatekeepers as everybody has become bloggers without proper training, while the social media is being used to undermine election and trust.

He said reporters are the first gatekeepers that should know the effect of a news story to the public before it gets published.

His words: “The advent” of the internet has reduced gatekeepers to gate watchers because the gate is now open for everybody to determine what the public needs to know.

“People have been clamouring to have laws to control fake news and hate speeches, once this law is put in place, it will restrict the freedom of speech, he said”.

He said technology has added to the problem we have in Nigeria, stressing that we cannot totally eradicate fake news, but it can be drastically reduced.

He said fake news, will distract readers from the main issue, saying  “We should focus more on issues like education, security and so on, rather than assassinating characters and spreading fake news.”

Also speaking, a veteran journalist and former chairman of the union, Mr Kayode Akinsola said for  democracy to survive in Nigeria, the media must be up to the task.

Akinsola who commended the council for the summit, noted that “Our environment is our major problem, because we have lost our values.

“ Children born between 1999 to date may not know anything about character as they are being fed with fake news and values.

“There should be censorship in our online reporting. There are some news that can’t be published in South Africa and Kenya, but everything is being published in Nigeria.

He posited that for the media to thrive, online journalists must have respect for the truth and the public.

“They must be able to censor their news and also report in accordance with the code of ethics of the profession”.