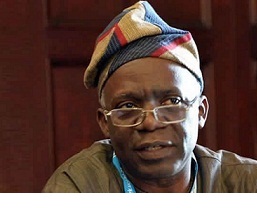 Falana rallies support for FG on war against corruption

Victor Akinkuolie Ado-Ekiti
|
A Human Right Lawyer and a right activist, Mr. Femi Falana, has stressed the need for Nigerians, especially the religous leaders to join hands with the Federal Government in ridding the country of corruption.

He also called for total and equal justice for all Nigerians, saying such will ensure peace and national integration in the country.

Falana who noted that government alone cannot win the war against corruption without the support of Nigerians said there is the need for religious leaders to always encourage followers and members to be upright and make integrity their watchword.

The renowned Lagos lawyer spoke at the international headquarters of the Word Bible Church, Lagos, during the 30th anniversary of the church and the calling of the founder, Prophet Julius BabatundeKumoluyi.

Falana who described Prophet Kumoluyi as a true man of God commended his commitment to the work of God and humanity.

Lamenting illegal arrest and detention in the country, Falana advised religious bodies in the country to mobilized their legal practitioner members to protect and defend their people against such.

He pointed out that, government must invest in justice, employment and security saying” the economy of the country must be made to service the people, that is the only way we can get justice in our country.

On the security challenges facing the country, he advised the governments to invest in the people and make the economy favourableto  them.