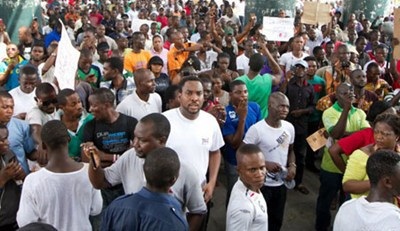 By Bayo Fasunwon
|
The cock crows at dawn, and the day begins anew. In major cities of the world, the hustle and bustle take a high momentum as people drag themselves off their beds, into the streets to seek for their daily bread. The movement of the seekers of bread continues into the noontime and the evening welcomes their tired feet into the deserted homes, to give solace to the weary body in preparation for another hustle in the morning to come.

This scenario plays itself daily, possibly with the exception of Sundays when most mortals seek the favour of their Creator for the hustles and bustles of the week to come. However, there are funny exceptions to this exodus of mortals in the working week. Amongst the travelers for bread are men and women who move from dawn to dusk seeking for where to hustle in order to earn their daily bread.

For these ones, a place to work is their goal, and not bread for the day. Many return empty with the hope that tomorrow’s search would open the doors of employment to them. In this same category of the hopeful, are another set of ‘job seekers’, mostly youths. These set are often seen idle, discussing, gisting, drinking or even playing games, disrespecting the morning.

When you listen to their discussions, it starts with the hopelessness of the country, the lack of jobs; oppression of the government and takes ecstatic crescendo in discussing about the Premier league and the workers therein, the footballers. They are idle, seeking for the movement of the water, refusing to stir it up, for the uhuru they seek. These set of people see government as the cause of their problem, and the government see them as the source of the nation’s setback. What an irony.

Parables of such people were given in the Bible. The parable sought to fix the problem rather than fixing the blame. It tells of a man who went out at different times of the day, between the hours of 6am to 5pm in the day, and met some idle persons at those times. He (as government should) interrogated their idleness. They gave the same excuses as many give today. They explained their skillfulness, their desire to work, but are rendered useless due too to the fact that nobody hired them. In other words, like their contemporary Nigerian counterparts, there were ready to work, but nobody cares to employ them from the labour market, the man government personified, did the needful, and employed them, at different times, into his farm, where food are really manufactured.

Agriculture has been the main stay of many economies. Many developed nations had engaged in agriculture as a precondition for the take off of their developmental programmes. The cultivation of lands for the sustenance of life remains the oldest of all professions. Myths, fables, and legends explain that the first profession of man was farming, then parenthood, and afterwards, war. In the earliest times in Nigeria’s pre-colonial history, and some centuries after, men are given wives on the basis of their demonstration of strength on the farms. Men with multiple wives are often, strong men, who cultivate acres of lands. Therefore, agriculture remained, prior to the oil doom, the employer of 70% of Nigerian youths.

At those times, the pyramids of groundnut, cashew, rice and other product of human sweat on fertile lands, were a delight to see. Modern day illnesses which stems from consumption of industrial foods were unknown, as natural food, grown behind the homes rid the bodies of unwanted pathogens. As the days of farm exploits waned, the green revolution and other initiatives fell through, and Agriculture, even in the school curriculum was laid to rest, at the doorsteps of the aged and retirees. The youths are too clean, sophisticated, and polished to get their hands soiled in the professions of the illiterates.  The earth therefore remained fallow to the joy of cattle’s, and rodents. Thus, the animal kingdom swelled and men are gifted with Ebola, Lasser fever and Zika diseases.

It is not a gainsay to observe that the Buhari led administration had focused on the diversification of the economy, with emphasis on the practice of agriculture as the catalyst for national development. Besides, the poverty and economic hardship experienced in the country had forced many to take up their grandfather’s hoes and cutlasses, and engaged in subsistence farming to make ends meet. Government has also made agricultural loans available and also encouraged the cultivation of emergent cash crops such as cassava and yams; and had encouraged the cultivation of import replacement crops such as rice. One could also hear jingles on radios encouraging Nigerians to embrace farming as a lucrative cash earner for their families. Despite all these, and many more, many lands are still fallow, and youths still unemployed.

The secondary school curriculum in practice now, is to me laughable and myopic. Personally, it makes no sense to me that animal husbandry is separated from agricultural science. The option given to students to choose from either has bereft the youth of the needed orientation and development of interest in the prospects and practice of crop production. In the days of holistic and productive education for self-reliance, students were given hands on teaching and experience in the practice of agriculture. Right from the first day in Junior Secondary classes, students were involved in planting, harvesting and processing of farm produce.

The joy of seeing your plants grow, the awe at harvesting of crops planted with our hands, and the laughter that followed the consumption of the labour of our hands gave the eagerness with which we awaited the next planting season. Nowadays, secondary schools no longer have demonstration lands for agriculture; the holding of a cutlass by any student signifies punishment, thereby conditioning their minds that agriculture is synonymous with punishments. Schools should consciously develop the interests for agriculture in their students as early as possible. If pupils already know the nature, manner, and benefits of agriculture, it would take less effort in getting them engaged in it as a profession in years to come.

Subsistence farming and large-scale industrial farming are not the same. The government needs to go back to the Western Region template of creating farm settlements for those who are and would be willing to engage in large-scale farming. Farm settlements demand the strategic allocation of land for agricultural purposes. Beyond that, it also involves the construction of accommodation (low housing of two bedrooms and one-bedroom apartments) in the designated settlements. In addition, the farm settlements must be made functional with the provision of necessary social service: electricity, pipe borne water, internet connectivity, and accessible schools for primary and secondary education. The provision of these facilities with the land would encourage many youths, who have tasted modernity, move from the cities and towns, and permanently reside on the farm settlements for wholesome agricultural practice. Besides this, the job of agricultural extension workers become easier as they know where and when to meet with these farmers. Hence, the introduction of specialized seeds and seedlings, and training on advanced method of crop and animal production becomes easier. The creation, sustenance and maintenance of farm settlements all over the nation is therefore not negotiable for the youths to accept a life of agricultural productions for national and self development. In addition, the government would do well to supply machines to the various local governments and farm settlements to as to encourage large scale and mechanized farming for better yield and higher productivity in the long run.

In addition to these, government should promote the profitable purchase and distribution of the farm produce such that farmers would not be filled with despair as they watch their products and financial waste away due to inaccessibility to local and international markets. In order to facilitate the sales of agricultural products, there is a need to open up rural areas and link them to the markets with accessible roads, and better means of transportation. Government can also buy these products from farmers and redistribute though various marketing channels to the consumers. If farmers are convinced that the means of making profits from their interaction with the earth is doubtless, then engaging in productivity will be with enthusiasm.

One of the various ways of making sure that sales are guaranteed is the promotion and creation of agricultural-based industries. These industries and factories are those specialized in transforming agricultural products into highly demanded finished goods. Thus, tyre manufacturing companies, paper mills, food and beverages companies, and others would have their footholds in Nigeria, and contribute in no small way to the development of the nation. Certain incentives and rebates should be given to these companies to encourage their domiciliation and technology transfers to willing Nigerians.

Finally, willing youths should continually receive training and re-training in order to make the best use of agricultural innovations. The release of take off grants to these youths would not be out of place in order to get them fully involved in food production. The youth should remember that education without hoe and cutlass is insufficient. If is not too harsh, government should be able to move around and rid them off the streets. If need be, they could be conscripted and made to go through the training. The time has come for all Nigerian youths to invade the fallow grounds and make a living from the gifts of nature.