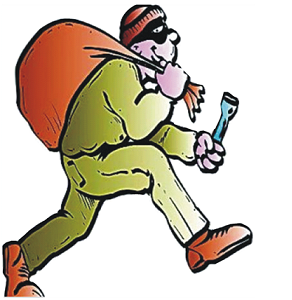 By Sunmola Olowookere
|
How do one begin to explain burglars fixation on just one house? It is a phenomenon that we are trying to unravel in our neighbourhood. It is five times in two years that a couple’s house has been burgled.

Residents are currently on their guard. They watch youths roaming the streets with suspicions. The words on residents lips now is “beware! neighbourhood thieves are on rampage in our neighbourhood again”. Residents would wake up in the morning and cries of lamentation over the loss of their property would rent the air.

Unemployed youths bore the brunt of our worst suspicions. After all, their dressing and the way they loiter around the neighbourhood gives one pause for concern.

Indeed, idle hands are the devil’s workshop. Our neighbourhood just like any other neighborhood has its fair share of these small town thieves. These are jobless young men and those that are awaiting admissions into higher institutions.

Most of these men idle away in the neighbourhood and the devil, magnanimous enough, would help them to secure “activities” that would keep them busy. These are activities that give man no pride; stealing.

The residents have their suspicions about the identities of those stealing their goods but there was no evidence to support the suspicions.

Hence, they report that unknown men steal their articles of clothing spread on clothing lines, generating sets and any property that are left lying fallow outside the house. They steal hens and goats that are left by their owners to roam the streets.

Most mornings, owners of those livestock’s would cry out their loss as they would be nowhere to be found.

Some of these thieves even burgle homes when the owners are not there.

Cases of burglary is taking on a frightening dimension in our neighbourhood as a family became a regular victim for these burglars. In the space of two years, this family had been burgled five times.

It was puzzling why their home was often targeted by these burglars. Their house was not the best looking in the neighbourhood. There were duplexes and better looking bungalows than theirs.

Yet, their modest house was the major target. Each time the burglars came, they would park all their electronics and other valuables including money.

One time, they came during the crossover programme of 31st December to January 1. They probably watched while the family left for the cross over service before swinging Into action.

They packed everything including the bowl of fried meat, and the soup prepared for the new year festivities. It was a very shocking experience for them. They bounced back soon after this and they chucked it up to activities of some hungry thieves.

However, at the fifth time, they could no longer tolerate it as their home was stripped almost bare. It was a strange thing. Only the chair remained. The wife cried bitterly and the husband gnashed his teeth and hissed with misery.

The recent incident threw off balance totally. The residents no longer sees it as ordinary burglary again. It was as if some people has it in for the couple and was bent on destroying them.

The police are currently combing our neighbourhood as the couple had gone to report it to the police. The youths are staying indoors so that they would not be picked along with suspects.

The couple no longer knows whom to trust as it was obvious someone is out to destroy them.