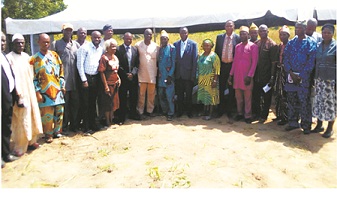 By Kehinde Oluwatayo
|
Farming has been described as a profitable enterprise that is capable of making anyone who is practising it rich provided everything required is available.

A cassava farmer, Mrs Mercy Igoni who disclosed this while speaking with The Hope in Akure  noted that farming though requires a lot of energy and needs endurance said the time of harvest is a time of celebration for farmers.

While saying land and fund are the major requirements for farming, Igoni said small holder farmers can only feed themselves and their families and may be have a little to sell.

According to him, when you have access to land and fund, you will employ people to work for you and will make enough profit to pay them and sustain yourself.

She stressed that she employs people to work for her since she can not do the work alone.

When asked why youths lack interest in farming, Igoni said they lack the knowledge and cannot endure adding that the reward of farming does not come immediately

“Someone like me have started farming from my childhood. There is no aspect of farming that I can not do. I can clear the ground, I can heap ridges and so on. In fact, I do bulk of the work by myself.

“These youths, when you employ them to work for you, after few hours, they complain of tiredness because they did not do it when they were young”, she stressed.

She called on government to make land and fund available so that farmers in the state can go into large scale farming to boost food production.