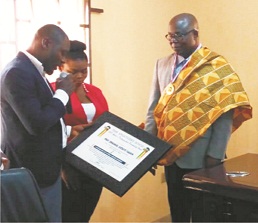 From Francis Akinnodi, Ondo
|
In recognition of his immense contribution to the development of the African continent, Rector, Federal Polytechnic Ile-Oluji (FEDPOLEL), Prof Emmanuel Adebayo Fasakin has been awarded the TRASI Africa Distinguished Personality Honor as Vanguard of Africa Development.

The honour was awarded by the Trans Africa Students’ Initiative (TRASI- Africa), a Pan-Africa Development driven initiative birthed by the resolutions of the All Africa’s Students Union third Annual Youth/Students summit held in 2012 aimed at tasking the upcoming generations on contributing vehemently to the development of Africa as a continent.

Prof. Fasakin, according to the group was honoured for his iconic contributions to societal, human capital development and mentorship in the education sector in Nigeria and Africa in general.

They averred that the Provost has distinguished himself as a successful administrator, scholar and a passionate mentor to African youths.

During his address at the conferment ceremony held at the Council Chambers of the Polytechnic, the Secretary-General of the association, Comrade Mohammed Ibrahim Kings, said the recipient is a patriotic Nigerian whoS3 ideologyou focus on societal development, nation building, human capital development, educational development, intellectual guidance to acolytes and protégés under his jurisdiction.

“We want to say that without fear or favour, Prof. Fasakin has been found worthy to receive the award, in acknowledgement of his immense contributions to nation-building, community development, effective service delivery to the continent, remarkable patriotism, selfless and dedicated service to God, humanity, country and Africa”.

Responding, Prof Fasakim commended the organisers for their integrity and thoughtfulness, noting that they have demonstrated that all hope is not lost for the African continent.

“Yours is a shining example with genuine initiatives, African youths can be galvanized, mentored and redirected towards positive societal engineering”.

He lamented that the standard of education is falling, and called fmon all stakeholders tosalvage the situation.

Fasakin  advised them to work together in synergy to sustain their noble objectives saying, “We need to work, synergise and have a rebirth of Africa values. You must also work in tandem to change the system for better.

“Leadership skill is essential and must be embraced by all, as you cannot give what you do not have”.

The Provost however dedicated the award to all members of the Polytechnic community for their support, dedication and focus towards realising the mission and vision of institution.