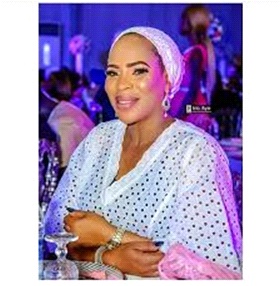 There is speculation going-on among Nollywood enthusiasts that popular Yoruba actress, Fathia Williams has found love again.
The conjecture arose after a picture of the actress with an engagement ring on her finger surfaced on the internet.
Popular Nollywood actress, and the former wife of Saidi Balogun has revealed that she finally found love again after giving marriage a second chance.
“Fathia Balogun, as she is popularly called, was married to Nollywood sensational actor, Saheed Balogun for many years but the marriage hit the rock after it produced two children.
Recently, Fathia Balogun as popularly called, got Nigerians on the internet talking after she flaunted an engagement ring on her finger.
While some of her fans congratulated her for finding love again, others were not happy with the good news.
In the entertainment industry, it is no news again that ladies are not always lucky when it comes to settling down and finding love and many of their marriages do not last.
Although, Faithia is yet to deny or admit that she is engaged.
The true identity of the man who proposed is yet to be disclosed to many.
But for the good news of finding love again, a lot of people reacted in interesting ways and congratulated her.