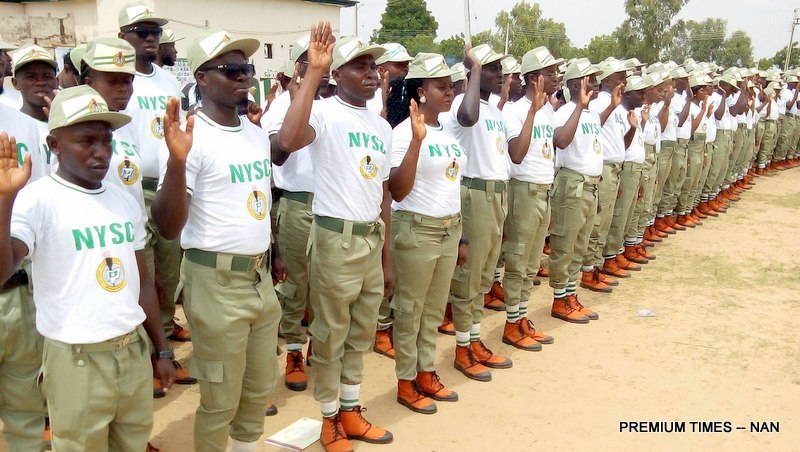 From Victor Akinkuolie, Ado-Ekiti
|
The Governor of Ekiti State, Kayode Fayemi has charged members of the National Youth Service Corps (NYSC) deployed to serve in the state to see their service as a call for dedication, perseverance and humanity.

Fayemi also admonished them to accept their service in the state as a rare opportunity and mark of honour to their fathers’ land.

The Governor represented by his deputy, Otunba Bisi Egbeyemi, gave the charge   in Ise/Orun Ekiti during the swearing in ceremony of the 2019 Batch B stream one corps members deployed to the state.

The Governor while congratulating the NYSC members admonished them to be resolute and patriotic as dynamic youths of Nigeria.

He reiterated the readiness of his administration to do everything possible within the limits of available resources to provide an enabling environment for the scheme in the state.

He encouraged them to use the opportunity of the three weeks orientation programme to make new friends and gain a better understanding of the culture and traditions of the state.

While wishing all the corps members a successful and  rewarding orientation exercise, Fayemi enjoined them to relate freely with their colleagues and members of their immediate community, saying such would enable them to benefit from their potentials and professional expertise.

Earlier, the State Coordinator of the NYSC,  Mrs. Emmanuella Okpongete, said about 2,019 corps members deployed to the state for the 2019 Batch B stream one will be participating in the orientation programme.

She explained that the corps members have been displaying a great sense of patriotism and enthusiasm since they arrived in the camp for the past few days.

Describing the NYSC scheme as one big institution in the country that has done so much to curb ethnicity, sectionalism and tribalism, she, Okpongele promised that the scheme will continue to impact positively on the nation through the contributions of corps members to national growth and development.

The coordinator appreciated the Government of Ekiti state for the continuous assistance accorded the scheme, the development which she said has assisted the scheme to make the permanent orientation camp conducive for corps members deployed to the state.

She admonished the corps members to embrace  loyalty, dedication, tolerance and dignity of labour to render selfless services to the state.

She assured that the present administration in the state will not renege on its promise to improve on the welfare of corps members serving in the state.

Okpongele advised them to avail themselves of many opportunities aimed at transforming the scheme for better that will be available during their service year.

The Ekiti NYSC boss disclosed that the NYSC has introduced Skills Acquisition and Entrepreneurship Development ( SAED)  Programme to make corps members self reliant after their service year.