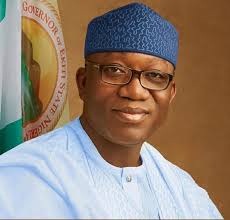 Fayemi out of isolation, addresses residents

From Victor Akinkuolie, Ado-Ekiti
|
After two weeks in self -isolation, the Governor of Ekiti State, Dr. Kayode Fayemi, on Tuesday, emerged from his solitary confinement to address  the people of the state on the development made so far on the Coronavirus pandemic.

During the early morning broadcast, the governor announced the relax of the lockdown imposed on the state since March 29.

He equally directedthat citizens are allowed to  trade between 6am and 2pm beginning from Tuesday and Thursday this week to restock and undertake economic pursuits that would keep their households during the Easter celebrations.

Fayemi, had earlier on Monday flagged- off Covid 19 Response/Food bank, which he assured that  about 20,000 households in the state would be benefit from the scheme.

According to him, “I just got out of self isolation this morning and this is the first state function I will perform since then.

“I decided to keep away from you all this while  I had to observe this as part of the ways to checkmate the spread of this virus.”

Fayemi explained that the curfew was  relaxed to allow the people restock, clarifying that harsh measure was taken to protect the lives of the populace in view of the daunting nature of the spread.

“We want to appreciate the tolerance and support of our people since the lockdown began. And we knows that the spread of Covid 19 was daunting.  But with unity of purpose, we will overcome.

“As part of the measures to protect our people, we shut down the state on March 29 for the initial 14 days with people restricted to their homes. But on Tuesday April 7 and Thursday, April 9, our people are allowed to move about between the hours of 6am and 2pm to restock. And the details of this will be made available later by the Ministry of Justice.

“We are particularly sorry for the hardship this lockdown and restriction has brought to our people , especially the poor ones”

Fayemi said the government will work out modalities to give financial supports to those whose businesses had been adversely affected by the restriction slammed on the state to rout  COVID- 19.

He said the government would fulfil the promises made to the populace that the food items would be distributed to those who are genuinely in need and who had registered with the Ministry of Budget and Planning as poverty-stricken individuals .

He stated that the government has begun decontamination through fumigation of public places like markets, hospitals, motor parks and other institutions across the state to further tame the spread of the lethal disease.