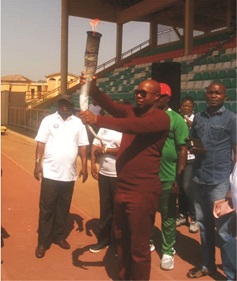 From Victor Akinkuolie, Ado-Ekiti
|
Ekiti State Governor, Dr Kayode Fayemi has pledged to support sporting activities and other programmes that will ensure peace and friendliness among the people of the state.

The governor said his vision for the state was to make it a place where people can thrive and live their lives in dignity.

Fayemi added that it was not only a clarion call to all but a move to chart a new course for a sustainable development of the state.

He spoke yesterday in Ado Ekiti, the state capital while receiving the Torch of Unity for the 19th National Sports Festival (Abuja 2018).

The governor who was represented by the Permanent Secretary in the State Ministry of Information, Youths and Sports Development, Mr. Kola Ajumobi said it was pertinent for the state known for its academic prowess to also look in the direction of sports.

The Minister of Youths and Sports, Mr Solomon Dalong who was represented by the Southwest Zonal Coordinator, Mr Ajao Olufemi led the delegation to the event held at the Oluyemi Kayode stadium, Ado Ekiti.

According to the Governor, “Ekiti has the highest number of professors and academic pioneers per capital in Nigeria and also have many of our citizens who are leading lights in every field of human endeavour as well as those who are at the frontiers of research in the academia and scholastic practice all over the world.

“It is therefore pertinent and logical to turn towards the attainment of feats in sport and games.

“In the recent past, the fastest man and woman in athletics came from Ekiti state, I am referring to Oludoji Fasuba and Damola Osayomi respectively who were both shining stars at their prime.

“Our greatest resources in Ekiti State remains our people, most especially our youths and since human beings are the measure of all things, then healthy and enlightened people can drive the sustainable development we want to achieve in the state.

“Let me recall that traditionally, the “Unity Torch” is a symbol Peace and Unity which is taken round the capital capitals of all the states in the federation in order to herald the National Sports  Festival and to transmit the message of peace and brotherliness among the people of Ekiti in particular and Nigeria in general”, he said

Also speaking at the event, the Ekiti State Sports Council, Director of Sports Mr Deji Samo voiced the readiness of the athletes from the state to participate in national sporting event.

He revealed that sportsmen and women that will represent Ekiti are already in open camp preparing for the games.