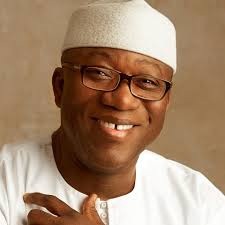 Victor Akinkuolie, Ado-Ekiti
|
Ekiti State Governor, Dr. Kayode Fayemi, has warned corps members posted to the state against embarking on any journey without official permission from the management of the scheme.

The governor also warned them against cybercrime, indiscriminate sex and other social vices like cultism, drug peddling,  kidnapping,  prostitution and robbery which he said are capable of truncating the good name of the scheme and destroy their lofty dreams.

Fayemi represented by his Deputy, Otunba Bisi Egbeyemi, explained that NYSC scheme has sustained the dream of its founding fathers in nation building, integration and unity.

While assuring them of his administration preference for security of lives and property, Fayemi urged the corps members to prioritize their security and welfare.

He said they should not hesitate to report strange movements in their environments to security outfits and make use of security numbers at their service guide while in distress.

The governor also charged corps members to respect the norms, traditions and  values of their host communities.

The Chairman of the Nigeria Governors’ Forum (NGF), stressed that respect for traditions of the host communities would prevent the corps members from offending the sensibility of the people.

He said: “I admonished you to shun every negative tendency such as cultism, thuggery, drug peddling, human trafficking, and any form of violence.

“Do not indulge indiscriminate sex or frivolous journeys without permission from relevant authority.”

Commending services rendered by corps members in the area of education, healthcare delivery, road safety, agriculture, drug law enforcement and fight against HIV/AIDS scourge and corruption, Fayemi pointed out that the Scheme has made positive impact in every part of the country.

He stressed the need for the corps members to be focused and patriotic in rendering selfless services to the sustenance of peace, unity and development of Ekiti state and the country at large.

The governor who promised to reward outstanding performance, urged  them to support government projects, policies and programmes geared at improving the plight of the masses.

Earlier in her address, the NYSC State Coordinator, Mrs. Emmanuella Okpongete, disclosed that the new corps members were exposed to trainings that would enable them to contribute their quota to national unity and development.

Okpongete charged the new corps members to shun any activities capable of truncating the good name of the scheme, and reiterated the commitment of the NYSC to execute developmental initiatives that would meet the felt needs of communities across the country.