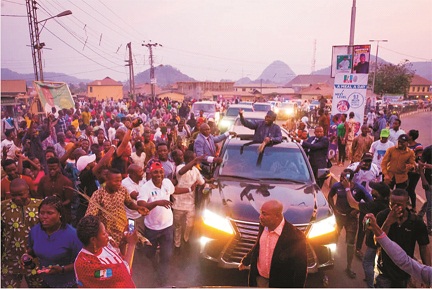 Victor Akinkuolie, Ado-Ekiti
|
It was a celebration galore on Monday 28, January 2019, in Ekiti state,  following the victory of Governor Kayode Fayemi, as the election petition tribunal sitting in Abuja upheld his election in the July 14, 2018 poll.

The carnival-like celebration which began at noon in the state immediately the verdict was delivered in Abuja saw members of the All Progressives Congress (APC) in the state capital trooped to the streets of Ado Ekiti.

As the broom wielding party members danced from Odo Ado area, a section of Ado-Ekiti metropolis to the government house, some assembled at the party secretariat at Ajilosun for a brief celebration. They later moved in a motorcade  procession to Amoye Grammar School, Ikere-Ekiti, where they were waiting for the arrival of the Governor from Abuja.

The tribunal, in its judgement delivered by Justice Suleiman Belgore, said Fayemi was validly elected in the July 14, 2018  governorship election, contrary to the position canvassed by the Peoples Democratic Party (PDP) and its candidate, Prof Kolapo Olusola.

Fayemi polled a total of 197,459 to defeat Olusola , who scored a total votes of 178, 022 to emerge a runner-up. The Tribunal began sitting in Ekiti last year August before it relocated to Abuja, citing insecurity in the state.

The highly elated APC members were led by a House of Representatives candidate in Ekiti Central Federal Constituency, Mr Sola Fatoba and Senior Special Assistant to the Governor on Mobilisation, Mr Tunji Ogunmola.

Ogunlola, while addressing the crowd said Fayemi worked very hard to win the election and that the judgement had confirmed the position of the party.

They danced to the music supplied by a popular musician who sang in Ekiti dialect and the long convoy of vehicles caused gridlock along the popular Ado-Ikere-Akure road.

The State Deputy Chairman of the party, Mr Sola Elesin in an interview with Journalists, said: “We are happy over the outcome of the tribunal, but we are not in any way surprised, because transparent election was held in the July 14 governorship election.

“It was clear that Governor Fayemi won fair and square, so we are not afraid even if they want to appeal the judgement, we are ready for them, because we have no skeleton in our cupboard. There were no cases of electoral malpractices”.

Addressing members at the party secretariat shortly after his arrival from Abuja, Dr Kayode Fayemi accompanied by other APC chieftains in the state, congratulated members of the party over the judgement,  said the judgement has affirmed his election as the validly elected Governor of the state.

He added that his election is a re- affirmation of the wishes of the vast majority of Ekiti people.

Governor Fayemi who hailed the judgement as another proof that the wishes of the people will always prevail, said he is forever grateful to Ekiti people for electing him as governor for a second term and by standing by his government.

“It is a victory for all Ekiti people. This is democracy at work. This is a reflection of the wishes of our people and I dedicate the victory to our people,” Fayemi said.

The Governor also urged his main challenger, the PDP candidate, Prof Olusola Eleka, to join hands with him and the rest of Ekitis in taking the State to the next level of development and prosperity.

“It is a great day for democracy. And the judiciary has proven again that it is the last hope of the common man.

“We shall now continue with the task of rebuilding our state and restoring the core values of our people without any iota of distraction,” he said.

Dr Fayemi also urged his supporters to be magnanimous in victory and celebrate in moderation, saying that he remains the Governor of all Ekitis regardless of party affiliation.

“It is a victory for all of us and together we shall restore the state’s lost glory.

“Our desire is to bring back peace, progress and prosperity to Ekiti State. The journey has just begun.

“I call on the PDP candidate, Prof Olusola Kolapo, who is an illustrious son of the state, to join us in the efforts to take the state to the next level of development and prosperity” , he added.

In his own, the PDP candidate in the governorship election and petitioner in the case, Prof Olusola Eleka, said the party will appeal the judgement.

Olusola, a Professor of Building Technology, who spoke through the Director of Media of his campaign organization, Lere Olayinka said: “That is not the last bus stop as regards the election petition Tribunal.

“The law is very clear regarding the hierarchies of courts we can approach to seek redress on this issue. We are surely going to appeal the judgement”, Olusola said.

In his own reaction, former Governor of Ekiti State, Ayodele Fayose, said he was not surprised with the judgement.

“I’m not surprised, judiciary already captured. the judgement was already in the public domain and celebrated by the APC more than a week before today.” he stated.

He enjoined Nigerians and Ekiti people to keep hope alive against what he called perversion, suppression and gagging of judges and by extension the judiciary.

His words: “In fact, the judgement was in public domain and celebrated by APC since the last few days.

“In the face of all these shenanigans, I still want to congratulate our candidate, my beloved Deputy Governor, Prof. Kolapo Olusola. Be assured victory is ahead.”