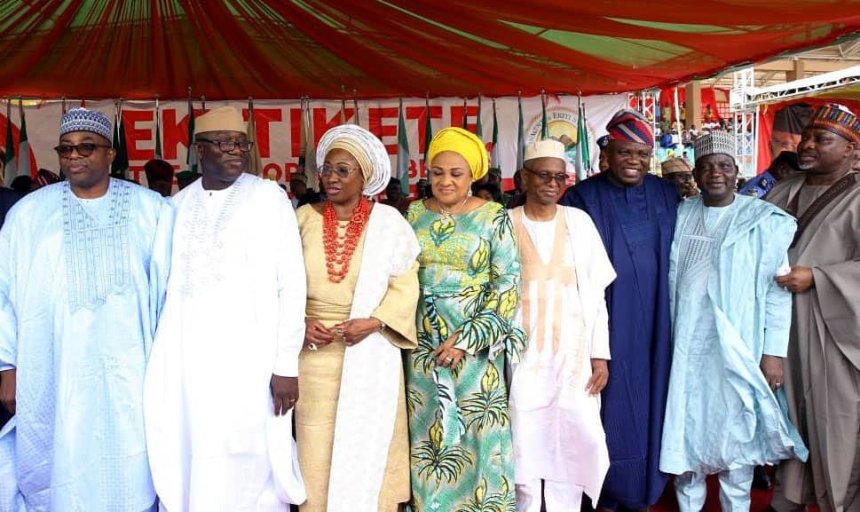 By Victor Akinkuolie & Chris Chimezie
|
As the elated people of Ekiti celebrate the inauguration of a new administration in Ado Ekiti yesterday, the news of a whopping N170b debt left by the Fayose administration has left a sour taste in the mouth of the citizens.

Governor Kayode Fayemi, who broke the sad news at his inauguration said independently and verifiable preliminary findings showed that the state was plunged into the debt with commitments to innumerable white elephant project.

He told a stunned audience that the debt included an average of eight months salaries owed across government entities with many state assets unaccounted for.

While stating that his coming back to office is not a revenge mission, but rather a healing balm on a painful wound, assured that within his one hundred days in office, ‘Ekiti kete’ will know the true position of things in line with its ethos of transparency and accountability in governance.

“We are not interested in trials by media, witch hunting or playing to the gallery. We will seek the truth and lay it before our people.

“As the events of the past four years go into the history books, we owe it a duty to ourselves and generations coming after us, to work together to ensure that never again shall we be deceived into making such a grievous mistake that has set us back so steeply on the development curve.

“Without any doubt, Ekiti has been through a horrible wilderness experience in the past four years. Our reputation as a people has been sullied and we have become the butt of jokes due to the crass ineptitude, loquacious ignorance and ravenous corruption masquerading as governance during these past four years”, he said.

He listed his administration’s agenda which he described as the pillar of his government to include; Social Investments, Knowledge, Economy, Infrastructure and Industrial Development and Agriculture as well as Rural Development.

While describing people as his administration’s greatest resource, he assured of reinstituting the social safety nets that would bring succour to the most vulnerable segment of the society.

This to him, included the Social Security Scheme for the elderly which he said, would be revived shortly.

He also made known, his administration’s determination to revisit the commercial and technical viability of abandoned projects with a view to advancing an economic, industrial revolution as well as job and wealth creation in the state.

The projects, according to him include: vast network of roads, community-based projects, the Ikogosi Warm Springs Resort, adding that his administration will carefully embark on new infrastructural projects that would be strategic in advancing economic growth and industrial development of the state.

“We will pay attention to fields such as teaching, research, skills development, creative arts, strengthening of the tertiary institutions and educational entrepreneurship”, he said.

Fayemi assured that Ekiti would play its rightful role as an integral part of the Development Agenda for Western Nigeria (DAWN) and work with other descendants of Oduduwa in other states in order to leverage its respective strengths and comparative advantages to fast-track the development of the region.

“I call on development partners, corporations and multilateral agencies alike, to please return to Ekiti state as this administration promises to be competent, accountable and willing partner, as our governance objectives are well aligned to global development priorities of the Sustainable Development Goals.

“Our plans and aspirations are also fittingly integrated with the programmes and policies of the Federal Government of Nigeria”, he said.

Describing the state’s economy as bad, Governor Fayemi appealed to the Federal Government for assistance in reviving it under the constitutional provision of Economic Stabilisation for Distressed states.

He, however, thanked the people of Ekiti whom he described as being the instruments through which the divine mandate was given to him and pledged to do right by honouring the oath made to the people.

Also, President Muhammadu Buhari, while addressing the elated crowd, urged them to return the All Progressive Congress (APC) to power in 2019 for all projects promised to come to fruition.

Represented by the Secretary to Government of the Federation (SGF), Boss Mustapha, he further urged the new administration not to relent in serving his people with compassion, commitment and tandum, and expressed expectations that the governor would take up the school feeding programme.

“Ekiti has been a beneficiary of developmental assistance in the areas of bailout, salary payment, refund of Paris club payment and developmental projects.

“We have also supported infrastructural projects in Ekiti including rehabilitation of roads, construction of the federal secretariat in Ado-Ekiti.

“Ekiti has also benefited from the Federal government social investment programmes with over 11,000 Ekiti graduates in the N-power programme.

“In response to the request for assistance in Ekiti by the Governor, the presidency has decided to assist with the launch of a specially dedicated presidential support programme that will assist Ekiti to recover lost grounds and place it in a favorable position for accelerated development,” he said.

Earlier in an interview, Ondo State Governor, Arakunrin Oluwarotimi Akeredolu (SAN), enjoined the people of Ekiti State to exercise patience with the new governor, as he begins to paddle the affairs of the state for another four years.

Akeredolu noted that the governor needs time to study as well as correct the wrongs he met on ground in order to ensure effective governance that will translate to development.

While expressing optimism that Governor Fayemi will not let the people of Ekiti down.

Akeredolu called for their cooperation to ensure all his lofty visions for the state come to fruition.