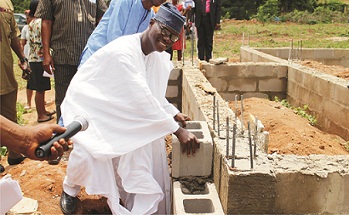 The alumni association of Federal College of Agriculture, Akure has laid the foundation of a N20 million auditorium in the school premises in a bid to enhance learning process.

Speaking at the foundation laying ceremony, the National President of the alumni association, Prof. Samuel Ogunrinde said the project was conceived during the 60th anniversary celebration of the institution two years ago.

He stated that a fund raising was organized from which the sum of N2,850,000 was raised.

The Alumni President expressed appreciation to those who honoured their pledges towards the auditorium project.

He commended the efforts of the immediate past Provost of the college, Dr Samson Odedina whom he said has contributed immensely to the development of the institution, saying a committee was constituted to oversee the project.

The Chairman of the committee, Mr. Olatunbi Teniola said that the committee decided to adopt direct labour approach in order to save cost in the project.