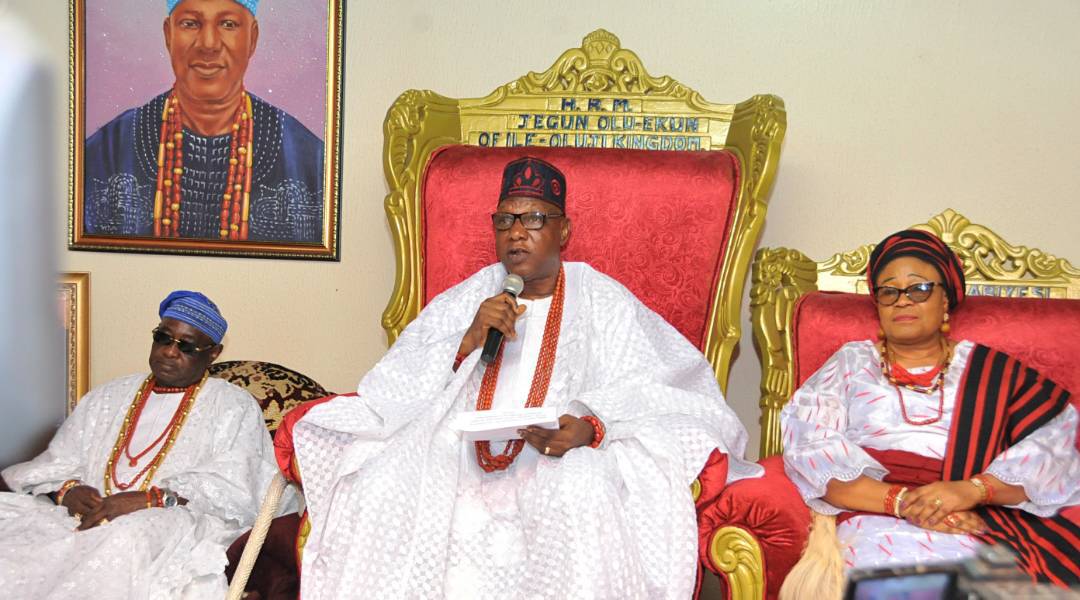 By Sade Adewale
|
The  Jegun-in-Council  under  the leadership of  the  Jegun  of  Ile-Oluji,  His Royal Mejesty (Oba)  Dr.  Julius  Oluwole  Olufaderin  Adetimehin has  inspected  some  on-going projects  at  the  Permanent  Site  of  the  Federal  Polytechnic,  Ile-Oluji.

The facility tour of projects was embarked upon as a way of strengthening the  relationship between the institution and the host community as well as extending hands of fellowship to the Polytechnic Community .

While receiving the Jegun-in-Council, the Rector, Prof. Emmanuel Fasakin acknowledged the support of the host community towards the rapid development of the Institution since inception.

He said, ‘this place is for all of us. I really thank God and the Ile-Oluji Community for the peace we have enjoyed because without peace, no progress. God is helping us and things are working according to plan’.

He remarked that the recent ranking of the Institution by the National Board for Technical  Education  (NBTE) as  the  thirteenth  in  the   country  is  a welcomed development, which the Institution is going to improve upon.

The  Rector  thanked  the entire Polytechnic  Community  for  sustaining  the vision of the young Polytechnic.

Meanwhile, various on- going projects and items of equipment were inspected during  the  visitation,  among  which  were,  the  Ceremonial  Gate  House; Administrative  Building;  School  of   Engineering;  Twin  Auditorium;  Road Network  and  the  Polytechnic’s  Power  House  with  7.5MVA  Transformer.

In his comment after the facility tour, the Jegun of Ile-Oluji, felt elated and appreciative of the warm reception accorded his entourage by the Institution and thanked God Almighty for making it possible for everybody to witness the great event.

He commended the Rector, the Principal Officers, HODs, Unit  Heads  and  every  staff  for  doing  marvellously  well  and  co-operating together towards achieving  the vision of the Polytechnic.

The Jegun observed that the Polytechnic would witness more developments while noting that, “we haven’t seen anything, what we saw is a tip of the iceberg, more are still coming”.

The  Kabiyesi  reassured  the  Polytechnic  Community  that  the  Ile-Oluji Community would not relent in its efforts in cooperating with the Institution, particularly in the areas of peace building and housing to meet the recent rising students population.