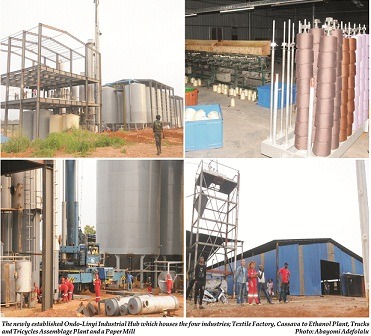 By Fatima Muraina
|
The Federal Government  is to  establish a  national industrial data base in Ondo State  to boost industrial activities and diversify of the  economy.

The exercise is in collaboration with the Federal Ministry of Industry, Trade and Investment and some selected consultants.

A consultant to the Federal Government on Industrial Matters, Mr David Emaediong made this known in a chat with The Hope in Akure,  the Ondo state capital.

Emaediong who carried out the exercise in Akure yesterday said the development is aimed at ensuring that companies are alive to creating  jobs and wealth for the state and the country at large.

“Another concern of the  Federal Government is that of diversification of the economy, we have been on one economy and it is limiting us while our youths are increasing and suffering from unemployment,” he said.

He described Nigeria as a consuming nation which according to him needs to diversify its economy and venture into other areas to generate revenue and food for the people.

” We should also be working towards exportation of what we have. We must not be depending on people and petroleum alone. We must eat what we produce and process them properly for exportation”, he noted.

According to him, government can not invest properly without a proper database and mobilization of other resources.

He stressed that government wants to know how to invest and tackle the problems of industrialists noting that challenges differ from one state to another.

“Government embarked on the exercise to ensure appropriate data base and create adequate revenue for people to do business which can only come up when it has a good database”, Emaediong stated.

” There is need for a proper survey in area of challenges among other factors that affect industrialisation in the country.” He said.

He urged stakeholders to be involved in the exercise holistically to meet the expected target of tackling the problems which he said affects everybody.