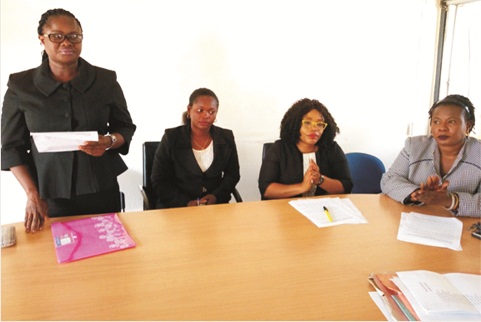 By Adekola Afolabi
|
The new chairperson of the International Federation of Women Lawyers (FIDA), Ondo State chapter, Mrs Bola Joel-Ogundadegbe, has vowed to ruthlessly fight all forms of abuse and violence against women and children to restore peace in the society during her tenure.

She equally promised to enhance the status of women by effectively pursuing equality, development, education and health education including eradication of prostitution,  support for “AIDS” programmes, abolition of harmful traditional practice inimical to the welfare of women and children through primary health care.

Mrs Joel-Ogundadegbe made the vow during the inauguration of the newly elected executives of FIDA held at the Ondo State Ministry of Justice, Akure, the Ondo state capital.

The chairperson explained that the core of their duty as FIDANS, is to restore peace in the society by fighting against abuse, prevent violence against women and children, protect their rights and as much as possible within their means, support the rehabilitation of abused children.

“Love and peace in the society begin with love for women and children, because  their wellbeing depends on the happiness  at home and strength of the society. However, contrary to this expectation, we find in our society gross abuse and violation of the rights of women and children, defilement of young girls, rape, domestic violence against women by their spouses and in-laws.

“Families are separated. Young boys and girls go into the streets to become drug addicts and prostitutes. No wonder, peace is evading the society very fast,” the FIDA chairperson asserted.

Joel-Ogundadegbe described the fight for peace, as a battle that must be won by the new executives by the grace of God.

While appreciating her colleagues for the confidence reposed in her, the chairperson also solicited the support and cooperation of the past executives and all FIDANS to ensure success of her administration, stressing that nothing can be achieved without unity and trust.

Other elected executives include   Happiness Demehin, as Vice Chairperson; Pamela Olowoyo, as General Secretary and  Mrs  Oluwaseun Koyenikan, as Treasurer.

The new executives will pilot the affairs of FIDA for the next three years.

Earlier, the out-gone Chairperson of FIDA, Olubunmi Niyi-Arajuwa, highlighted some of the achievements of the past executives to include vigorous war against violence against women and children, especially rape and battery, while several complaints and petitions from individuals about abuse of the rights of women and children were also treated.