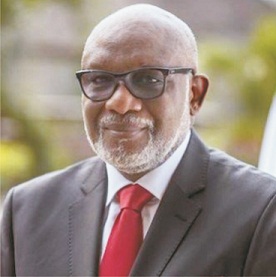 By Kayode Adegbehingbe
|
Coming in as the governor of Ondo State in February, 2017, Arakunrin Oluwarotimi Akeredolu met an economy in dire straights.

The debt profile of the state was to the tune of N220b and there was a general malaise of the economy, which was in depression, having contracted due to the fall of the price of petroleum in the international market, being the main product that props up our economy.

The new administration had to call on all its inventiveness to not only bring the state out of the financial quagmire but to also see to the actualisation of the various promises made to the people during the electioneering campaign.

It became imperative to take certain steps to not only revive the economy but to most importantly, do old things in new ways to ensure a better outcome.

It is clear that one cannot continue to repeat the same thing while wishing for a different outcome.

In his speech while presenting the 2019 budget to the Ondo State house of Assembly, Governor Oluwarotimi Akeredolu could not hold back his excitement, saying: “On assumption of office on February 24, 2017, I met an Ondo State beset with severe financial challenges. Federal Transfers from the Federation Account had dipped drastically, the State was burdened with a huge debt profile, and the deficit threatened our capacity to deliver on our development objectives as well as the Government’s ability to meet statutory obligations to workers and contractors.

“It is with great pride and joy that I announce with palpable glee, Mr Speaker, that we have consistently, through prudent management of the very lean resources, paid our workers on a monthly basis, as well as offset six of the seven-month salary and pension arrears inherited from the immediate past Administration. We remain hopeful and confident that, with discipline, prudent management of public finances, strategic planning and the can-do spirit of our people, we shall overcome all challenges and our economy will become stronger, better and more resilient.”

The government had to bring on board certain form of financial engineering to move the state forward.

One of the steps taken was to dust up a law which was enacted in 2014, called the Land Use Charge Law.

It used to be called tenement rate, collected by the different local governments, but it is now, based on the law, whose enforcement started last year, collected centrally by the state government, for better transparency and ease of collection.

After a few teething problems were resolved through advocacy drives and consultation with the stakeholders, the programme kicked off in Akure, Owo and Ondo and within a few months, N48m was realized, which has been shared between the state and local governments, with the state, taking 80 percent and the local governments 20percent.

What has been shared is money accruing from collection made from fee months last year and the first quarter of 2019.

At the event held to disburse the money to the local governments, the Chairman of Ondo State Board of Internal Revenue Service, Mr. Tolu Adegbie informed that the amount being shared is more than all that has been realised in the past put together.

It is pertinent to note that only three local governments out of a total of 18, have been covered by the scheme.

But as it is, this has expanded the revenue base of the state and blocked loopholes. But there is a call by the Chairman of Okitipupa Local Government, Mrs Morenike Alaka, for a review of the law towards increasing the percentage that should go to the local governments, while she charged the state governments on continuous advocacy to ensure that the people in all the local government areas comply with the law.

Another policy direction that the government also embarked on was to digitalise the process of governance, through the Ondo State Integrated Financial Management Information System (SIFMIS).

As a part of the World Bank backed Ondo State Public Sector Governance Reform and Development Project (ODPSGRDP), SIFMIS is described as a sub-component of the Public Finance Management (PFM) reform to support human resources management and payroll, planning and budgeting, transaction processing, accounting, auditing and reporting on the use of financial resources.

The Commissioner for Finance, Mr Wale Akinterinwa said that the system would enhance smooth operation, greater accountability, transparency as well as reduction in cost of governance.

Anything that would enhance probity in government finances should be welcomed. And Ondo State did so well with regards to SIFMIS, that in far away South Africa, the state won an award.

According to reports, the Ondo State government was awarded the second runner up at the SAP awards held in South Africa.

“SIFMIS is a priority under the present administration and must be successful, no matter the challenges at the outset,” Akinterinwa said.

According to the Accountant General of the state, Mr Laolu Akindolire, SIFMIS would not only facilitate complete and timely exchange of data and information among ministries, departments and agencies among others, it would also strengthen the workforce to achieve its objectives.

“In order to strengthen the workforce and bring about efficient service delivery, the state Government with support of World Bank embarked on carrying out public sector reform programmes.

“SIFMIS is one of the sub components of the Ondo State Public Sector Governance Reform Project. As the name implies, it is the warehouse of data for all government business processes.

And the governor noted thus: “The SIFMIS project, I believe, will drastically change the way we handle our procurement, our accounting processes, our human resources and payroll, the way we pay our vendors and the reports we are able to generate and view. I am very optimistic that SIFMIS will upgrade our civil service to a highly effective and efficient standard.”

The use of SIFMIS to enhance cost effective service delivery makes it a veritable component of the financial re-engineering of the state.

Another financial stroke of genius, so to speak, displayed by the administration is with regards to the Universal Basic Education funding.

For four years, the counterpart funding needed to access N3.9b of federal resources was not paid, depriving the state of needed funds to revamp primary education in the state.

But some time ago, Akinterinwa revealed: “We have been able to raise the required counterpart fund of N3.9 billion, which will attract another N3.9 billion from Universal Basic Education Commission at the national level.

“The fund is meant to help tremendously in the improvement of our educational infrastructure and enhance the quality of education of our pupils when fully put in place in the state.”

And when the funding came, the construction and repairs of primary schools began in earnest, inclusive of supply of computers, supply of playground equipment and the supply of books and provision of modern toilet.

Over 700 schools have already benefitted. This can be regarded as unprecedented in the annal of the state.

By providing the matching fund of N3.9b, the state got N7.8b in return.

That is a master stroke of financial engineering, something akin to “money doubling”, not for any pecuniary gain but to enhance the education of the future generation through whole hearted devotion to their cause.

Before the contracts were given out, the money is already available and there are layers of supervision to ensure that the right things are done. What the government has done in provision of education infrastructure should be commended by all.

Another sector which gulps a lot of money and is a concern of government in its service to the people is the health sector.

As the adage goes, health is wealth, the state government is tinkering with the health sector by kicking off an health insurance scheme, whereby with a token paid by the populace, the 4million inhabitants of the state would be able enjoy health coverage.

That is the standard practice in developed world, which has led to great improvement in their life expectancy figures.

Through the scheme, everyone is meant to enjoy healthcare coverage, with a great reduction in out of pocket health expenses.

Concerning the scheme, Governor Akeredolu said, “The state contributory insurance health scheme is already on board. The bill has been passed, the members of the Board have been put in place.”

Akeredolu signed the contributory Health Scheme into law on February 6, 2018.

According to the Governor, the contributory Health Scheme will ensure that every residents of the state has access to good health care services. It will protect families from the financial hardship posed by huge medical bills and regulate the rise in the cost of health care services

“It will Improve and harness private sector participation in the provision of health care services and ensure appropriate patronage at all levels of the health care delivery system.

“It will protect families from the financial hardship posed by huge medical bills and regulate the rise in the cost of health care services.

“The bill will ensure that the poor and vulnerable have guaranteed basic minimum package as defined under the National Health Act and equitable distribution of health care costs across different income groups.

“It will also ensure the availability of alternate sources of funding to the health sector for improved services,” Akeredolu explained.

This alternative way of funding the health section would not only enable it to flourish, but could free up more resources of government to further expand the health frontiers of the state.

It would definitely be a win-win situation for both the government and the people.

The objectives of the scheme with regards to funding includes: to ensure that all residents of Ondo State have financial protection, physical access to quality and affordable health care Services; to protect families from the financial hardship of huge medical bills; to regulate the rise in the cost of health care services; and to ensure the availability of alternate sources of funding to the health sector for improved services.

Commenting on the scheme, National Chairman of the Association of Community Pharmacists of Nigeria, ACPN, Pharmacist Samuel Adekola, said the Contributory Health Insurance Scheme is the most people centred, patient centred, professionally acceptable and most easy to implement.

“There are states who have passed their laws five, seven years running and cannot implement because of certain encumbrances. I want to let you know that we have passed the law to the National Secretariat of NHIS to serve as benchmark for the remaining seventeen states of the federation that have not had their own law on the Health Insurance Scheme.

“We will like to say that the Association of Community Pharmacists of Nigeria will strongly support the implementation of that law.”

The Ondo State government is not one for giving excuses, but has moved the state forward through various kinds of financial refocusing, and has shifted the economic narrative.