Fire and fury in Johannesburg 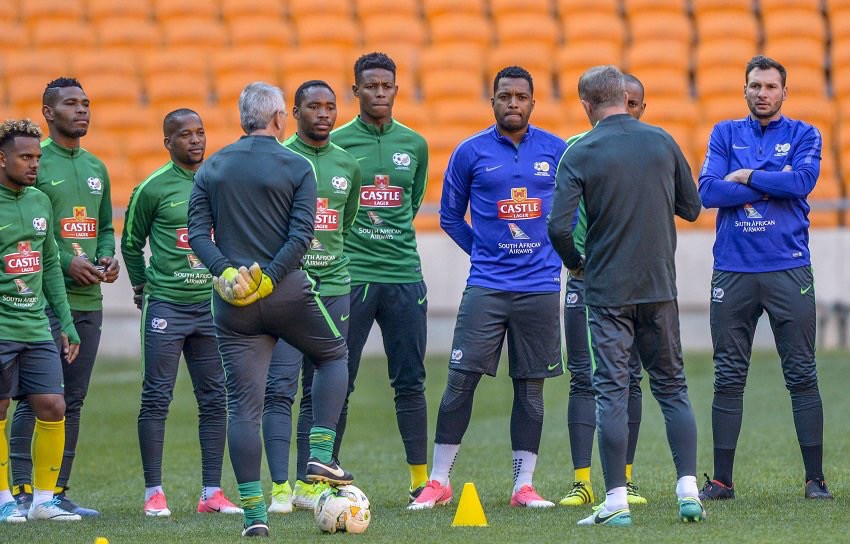 By Steve Alabi
|
No one can safely predict the outcome of Saturday’s crucial AFCON qualifier between the Super Eagles and Bafana Bafana in South Africa simply on account of the fact that Nigeria, despite going into the tie weak and weakened, is quite unpredictable. There is no Mikel Obi and the group’s leading goalscorer, Odion Ighalo and goalkeeping prodigy, Francis Uzoho are also out.

South Africa is even more unpredictable. The Bafana Bafana whitewashed Seychelles 6-0 at home and amazingly drew blanks in the return leg, against a team that had conceded 13 goals and scored a solitary one before the game. The whole world thought Seychelles were going to be thrashed again but the South Africans forgot their scoring boots at their FNB Stadium hunting ground. The South Africans are the best scoring side in Group E, having scored eight unreplied goals; they also parade the stingiest defence which no opponents have breached in four qualifying matches.

In contrast, the Eagles have tasted defeat once, incidentally in the hands of the South Africans, a 0-2 spanking right in their backyard at Godswill Akpabio International Stadium, Uyo in the group’s opener and Gernot Rohr’s first home loss since he took charge. The team has since bounced back, leapfroging South Africa to the front seat with three straight wins, one away over Seychelles and a double over Libya. But unlike the stingy South African defence, the Nigerian back has been breached four times, twice each by South Africa and Libya.

Where the challenge is more serious is in the attack. Of Nigeria’s ten goals in the series, one player, Odion Ighalo has accounted for six and he is missing in action on Saturday! Vice captain, Ahmed Musa has two while the rest two are shared between Chidozie Awaziem and new boy, Samuel Kalu. Nigeria is thus faced with an attacking challenge of weakened deadliness against a strong and stingy South African defence. How the Eagles navigate this challenge is key to their success or failure in this game.

In the absence of Skipper Mikel Obi and in-form pointsman, Odion Ighalo, do the Eagles have the experience and potency to overwhelm Bafana Bafana, particularly to withstand incessant pressure from a desperate opposition? It is difficult to answer. The Eagles have a tendency to create many chances without taking them. They also suffer from disastrous losses of concentration at the back, resulting into avoidable goals. These are the weaknesses the opposition will likely exploit. These are the weaknesses that we expect Gernot Rohr to work on to get a result.

The Bafana Bafana’s strength at the back is not replicated in their attack where only one player, Percy Tau has scored more than once. Tau has just two goals in the series, the rest shared among five others and a Seychelles own goal. This could also mean that any player is capable of getting goals.

But make no mistake about it, the South Africans will come against the Eagles with all power, guile and cunning. The Bafana Bafana have called up their best legs, including two goal hero, Tau who scored against Nigeria in Uyo. They are condemned to beat Nigeria and will do everything in the books to achieve this. They have the added advantage of playing before their boisterous fans, the proverbial 12th player but Nigeria has a rich history of beating them in their own backyard: four solid times.

In ten competitive clashes, South Africa has won only once, the 0-2 shock victory in Uyo last year while Nigeria has secured six victories, the rest ending in draws. In statistical terms, the Eagles have the advantage but statistics is unreliable in rivalries of this nature, what with the unpredictability of both teams. Both have the capacity to produce exhilarating performance and the propensity to self-destruct.

Thirty nine year old Gambian, Bakary Gassama has the unenviable task of refereeing this crucial cracker at the FNB Stadium in Johannesburg on Saturday. Gassama has quality experience in top flight matches, including the 2018 World Cup, 2017 FIFA Confederations Cup and 2012 Olympic Games. He had the honour of officiating the 2015 AFCON final between Ghana and Ivory Coast. It is significant that there is no controversy to his name. Both teams can therefore expect a robust and fair officiating.

Can we stick out our neck for a Nigerian victory on Saturday? We will be pandering to our Nigerian emotions if we do that but when it comes to South Africa, the Eagles are capable of anything. Especially with the added motivation of opportunity to revenge that Uyo disaster of last year. One thing we can be certain of is that there will be fire and fury in Johannesburg on Saturday. May the Eagles come out unscathed.