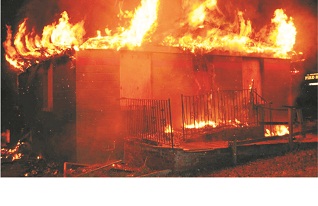 By Tola Gbadamosi
|
Properties worth millions of naira belonging to Ekamarun Anglican Grammar School in Ifon, Ose Local Government Area of Ondo, were on Sunday destroyed by fire.

The Hope Metro gathered that the inferno which started around 4pm on Sunday evening affected the offices of the principal’s, vice principal , the bursar and the registry, including three classrooms before help could reach the school.

The school principal, Mr Oni Victor Olusola, said he was called that the school was on fire and that the administrative department of the school was completely consumed, while value records and school properties were destroyed.

According to him, “So many valuable equipment were destroyed by the fire which raged for more than an hour. We are not connected to electricity, so we cannot attribute it to power surge.

He emphasized that there was no bush burning that should warrant such fire outbreak, describing the situation as terrible.

Olusola, who was available with all the staff of the school when our correspondent visited the school, lamented that the school have been on mid-term break, to resume on Tuesday.

”Now, we don’t know where to place the children for now.

”I have informed the director of TESCOM in Owo \Ose zone, Mr Gabriel Abimbola, for swift action on the matter, ”he said.

The Hope Metro gathered that the security man on duty at the time of the fire, said he saw some teenagers entered the school premises, but he chased them away with a catapult.

He was said to have claimed that he did not suspect the children for any reason since it was not their first time of entering the school.

A reliable source said the security man had been invited for interrogation.