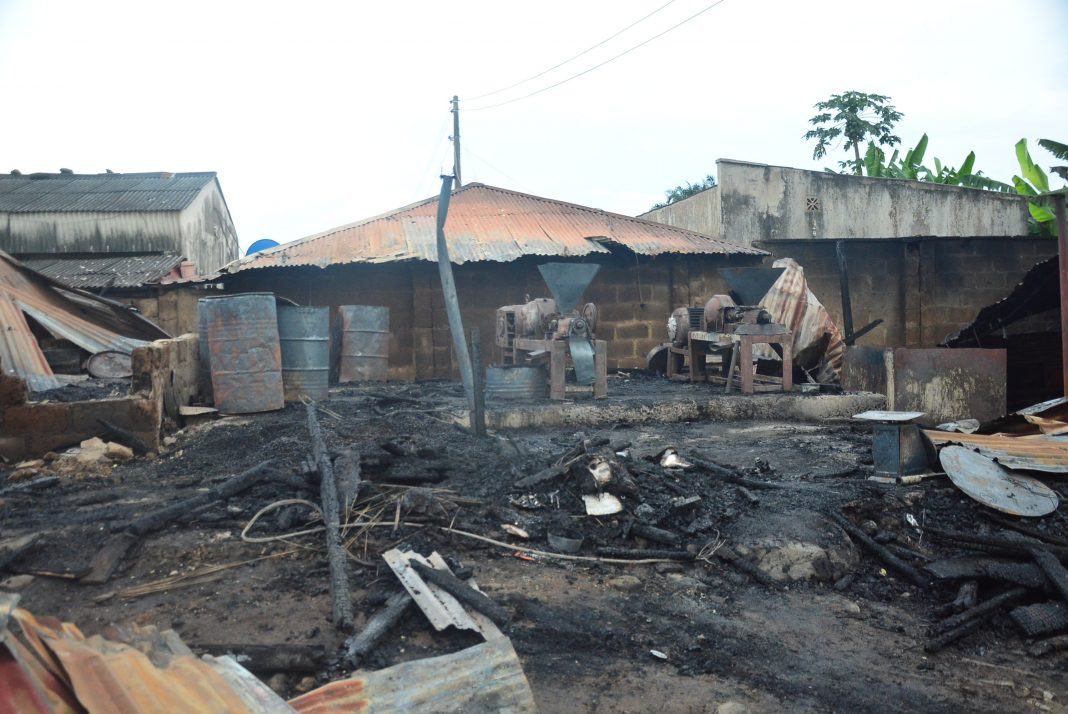 A palm kernel factory worth over N10million was yesterday razed down by fire at the industrial Park in Onyearugbulem junction, Akure .
The inferno was said to have been caused by a spark from the change-over box within the factory.
Eyewitness said the devastating fire consumed all the raw materials and burnt the machines used for processing.
The Hope Metro learnt that one of the workers, whose name was not mentioned is currently on admission in a private hospital following the devastating effects of the inferno.
The owner of the factory, Mr Adesunloye Adeniyi, who said he had been in the palm kernel processing business for over 10 years told The Hope Metro that, “We just got here this afternoon shortly after we had spark from the exchange box and the next thing everywhere was on fire.
According to him, he also lost a heavy duty power generating set to the inferno besides several raw materials for processing Palm kernel.
“I only have five workers on ground and we were not able to salvage because everything was highly inflammable spreading very fast.
“The goods I have lost today is more that N10 million as I have two machines and each is worth over two million naira. We had 500,000 tonnes of raw materials on ground. And each tonne cost N350,000 not to talk of the structure on ground.
“This is what I have been putting together for over 10 years now, it has gone down the drain.
However men of the Federal fire service were on ground but everything had been burnt to arches before their arrival.
Adeniyi revealed that a similar situation almost occurred sometime ago, but was averted as a result of precaution taken.
Also speaking, the chairman, Palm kernel Industrial Services, Mr Joseph Daramola, who strongly sympatise with the victim said, “This is just too bad and a terrible loss to my member and his family.
“He has been working very hard for over 10 years and in few minutes, everything went down the drain.
This is indeed, painful. I am calling on every Nigerian to please come to his aid because times are very hard now and it might be difficult to get himself together.
Daramola advised that everyone should make sure they are involved in safety. They should take precaution in putting off every appliance in the factory to avert such incident in future.