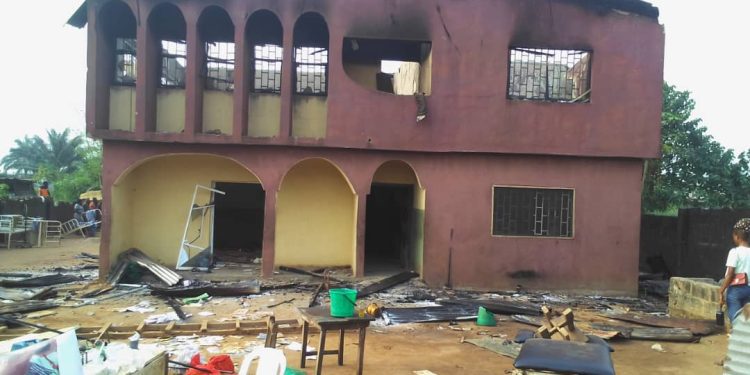 Property worth millions of naira were in the late hours of Wednesday engulfed a four-flat private hospital named (Flower Garden) at the new garage, Okitipupa, headquarters of Okitipupa local government of Ondo State.

The Hope Metro gathered that the unfortunate incident started around 9 pm on Wednesday.

The inferno was said to have started from one of the top two flats used as residence by the doctor and his family.

Reports had it that the fire outbreak was caused as a result of storage of petroleum in the affected building, because of the recent fuel scarcity.

All efforts by the residents to quench the fire proved abortive since there was no functional Fire Service in the area.

However, no life was lost in the incident. Some residents who spoke with our correspondent said they suspected the inferno was caused as a result of the storage of petroleum in the house due to scarcity and the high cost of petrol.

One of the residents, who does not want his name in print, described the incident as unfortunate and blamed whoever was involved in the storage of petroleum in the house.

“No doubt, this is a big loss to the owner of the facility/ Hospital and the tenants who lost their property to the fire outbreak.

“However, we will not relent in sensitizing our people on the havoc attached to the storage of petroleum in the house. People should desist from such habit,” he advised.