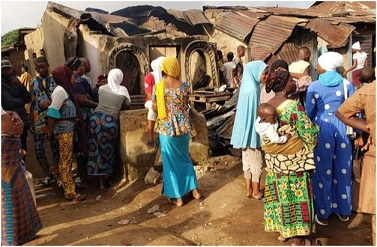 No fewer than five lock-up shops were destroyed by an inferno which broke out in the middle of the night at the Tomori compound in Òde Òkè, opposite St Peter’s Anglican Primary Church, Ede.

According to a family source, the incident happened in the middle of the night around 12 midnight.

He added that they were alerted by motorcyclists.

Some of the properties destroyed in the shops were tailoring materials, fabrics, dryers Aluminium fabrications among others

Another witness said the fire burnt several properties and goods in the shops, which prompted some people to visit the fire station at Ọjà Timi.

However, fire fighters could not immediately rescue the situation which later prompted several passers-by to assist the victims.

Men of the Nigeria Army, Nigeria Police, Amotekun and other security operatives were on ground to assist in stopping the fire outbreak from escalating.