First Olujoka gets Staff of Office 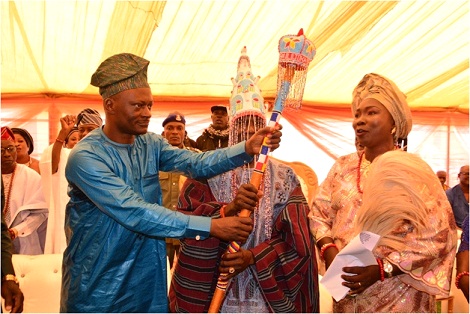 History was made in Ijoka Community, Akure South Local Government area   as Ondo State Government presented instrument of appointment and staff of office to the first Olujoka of Ijoka, Oba Anthony Ejide Oluwalade.

Presenting Staff of Office and instrument of appointment to the pioneer Olujoka, Ondo State Attorney-General, Sir Charles Titiloye admonished Oba Oluwalade to see his appointment as a divine call to serve the community and cooperate with the state government to enhance the security of lives and property.

Commissioner for Justice, Sir Titiloye, congratulated the people of Ijoka for realising their age-long aspiration of having an Oba to superintend their affairs. He also congratulated Oba Oluwalade for being the first Olujoka of Ijoka.

He stated that, “Government will not allow or tolerate a domineering tendency by any Oba in the state. Traditional rulers should avoid installing lesser chiefs in areas outside their domains or in disputed areas.”

Chairman of Akure South Local Government Area, Gbenga Olaniyi, described the event as a positive development for Ijoka community. He thanked the state government for tarring and dualising Ijoka road.

He equally lauded the Akeredolu administration for its giant strides in security which led to the establishment of Amotekun, saying, “Now the people can sleep with their two eyes closed and can also go about their normal business.”

In his acceptance speech, Oba Oluwalade thanked the state government, his chiefs and community members for their support so far, saying, “I have been serving my community selflessly and I didn’t know it would take me thus far. I want everyone to learn from that.”

Some of the Ijoka chiefs also took their turns to give testimony about the newly installed king and prayed for him to have a successful reign.

High Chief Olasunkanmi Owoloye, the Olisa of Ijoka described Oba Oluwalade as a good person, loved by all. “He also loves all of us the chiefs under him. He has been contributing to community development and is loved by all,” he added.

High Chief (Mrs.) Olowoiya Aina, the Iyalobirin of Ijoka, thanked God for elevating Oba Oluwalade from Olu to kingship, praying that God would give him wisdom to rule the land. She also prayed that his reign would bring prosperity and development to the land.

Chief Adeleke Isaac Itiola the Otunba of Ijoka, described the new king as  patient and accommodating who is reliable and loves strangers.

Chief (Mrs.) Folashade Adebayo, the Iyalaje of Ijoka, admonished the new king to continue the good work which had brought him thus far.