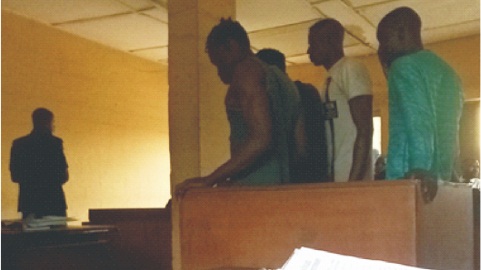 Five men have been remanded in Olokuta prison custody by an Akure Chief Magistrate’s Court for allegedly stealing cable wires within the Ondo State High Court premises.
The defendants are Ayomide Oladeji, 18, Ashaolu Micheal, 22, Dago Aminu, 25, Jafa Sanni 27 and Umaru Ibrahim, 18.
They allegedly committed the offence between May 2022 and June 1, 2022 High Curt Premises in Akure Magisterial District
The prosecutor, Inspector, Mary Adebayo told the court that the Oladeji and Ashaolu stole cable wire valued N1.2 Million property of High Court Akure.
The charge read, That you Ayomide Oladejl ‘m’ and Ashsolu Micheal ‘m’ on the seme date, time and place in the aforementioned Magisterial District did steal cable wire valued at N1,200,000 00 property of High Court Akure.
They committed an offence contrary to Section 183 and Punishable under Section 361(9) of the Criminal Code Cap 37 Vol 1 Law of Ondo State of Nigeria 2006.
The defendants pleaded not guilty to the offence slammed against them by the police.
The prosecutor prayed the court to adjourn the case to enable her present the prosecution witnesses and prepare them for trial.
Their counsel, Ola Adedire, pleaded with the court that her clients were innocent of the offences leveled against them.
Adebayo opposed the bail application made by the defendants counsel saying that three of the defendants does not have home address and if court should grant them bail, they would jump bail.
She urged the court to remand them for them to present for their trail.
Magistrate, Musa Al-Yunus in his ruling, ordered the remand of the defendants in prison.
He adjourned the case till June 10, this year.

Keep to the ethics of teaching profession -ANCOPSS Veteran