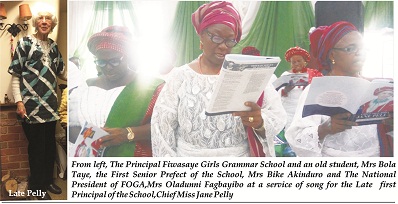 By Bukola Olamona
|
The  first late Principal of Fiwasaye Girls Grammar School, Akure, Chief Miss Jane Pelly has been described as a woman who lived a sacrificial life for humanity while alive.

The Anglican Bishop of Akure Diocese, Rt. Rev Simeon Borokini  stated this in a sermon titled:”Do you know where you are going?” at a service of songs for her at the school hall.

Taking his text from Revelation chapter 2 verse 10b, he said Miss Pelly left her comfort zone where things were well organised to where she did not know, saying it  was a sacrificial life.

Borokini described Miss Pelly as a woman of the century who imparted positively  many lives who have become influential people in the world today.

According to him:” She was an educationist and God used her to touch many people. Through her, many have been lifted, many who passed through her are people to be reckoned with today.

“Thank God for her life, because she knew where she was going but not everybody knows where they are going,” he said.

In an interview with the National President of FOGA, Mrs Oladunni Fagbayibo, she described her as a very nice, considerate, motherly person who treated everyone like her own children.

“When she was with us, she took care of us like her own, very strict, she was always looking for admission for those she thought could not move forward maybe due to the inability of their parents, she was so particular about everybody,” she stated.

Also, the Chairman Ondo State Micro Credit Agency, Mrs  Kosemani Kolawole described her as a mother, who never had any child of her own but brought the girls up as her own and raised them to be responsible and assertive.

“She taught us to do the right thing, at the right time in a right way and gave us real foundation and monitored us all,” she said.

Chief Mrs Akinseloyin Adeola, who said Miss Pelly was leaving the school while she was coming in, said she heard a lot about her  as some seniors were telling them they had missed her mentorship.

” We were told she lived for Fiwasaye Girls Grammar School and vowed to raise  princesses that will eventually become  Queens in the future and you can see that her dreams had come true, ” she said.

Many FOGAs from all walks of life were present at the service of songs.