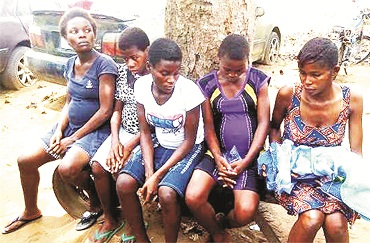 By Maria Famakinwa
|
The evil of baby factory which started years ago in the South East is spreading fast and all attempts to curb it seems not to be succeeding in the light of current revelations.

In the last six months, the media has been inundated with news of police raids of the baby factories with many pregnant women and teenagers reportedly rescued from the operators of the baby factories. In a pathetic case of child abuse, young girls are housed, impregnated en masse and after the children were born, they were sold to interested buyers.

In one of most recent cases, police in Akwa Ibom state, arrested a suspected operator of a baby factory, Ndukeabasi Okon, who has been in the illegal business since 2016, disclosed that he used to sell a male child for N400,000 and female child for N300,000. One of the two girls who were rescued, according to report, was seven months pregnant.

Also, it was reported in September last year that nineteen pregnant girls were rescued by policemen in a Lagos baby factory. Most of the girls who were reported to have been allegedly abducted for the purpose of getting  them pregnant and to sell their babies were between 15 and 28 years old. Another baby factory was uncovered in November last year in Anambra State by a Special Anti-Child Trafficking Task Force where teenage pregnant girls were kept until childbirth and their children sold to childless couples.

Findings revealed that baby factory business is booming because the operators deal with unmarried young girls having unwanted pregnancies  Aside this, findings also revealed that operators of baby factories lured some indigent girls with money and were impregnated by men under their payrolls.

The Hope spoke with some Nigerians on ways to end menace. In the submission of an educationist, Mrs Musurat Ileola, described the operation of baby factory as an injustice against children and morals the society is known for. ” It is the worst kind of abuse to be selling babies  like a piece of mechandise. It is a brutal practice, where young girls are promised to be paid huge amount of money for delivering a baby in such obnoxious conditions. This is a sign of the degeneration of our society where morality and human dignity are disregarded in the name of making money.”

On what should be done to curb it, she advised parents to show love to their daughters who became victims of unwanted pregnancies by giving them psycho-social assistance needed to overcome the emotional stress instead of abandoning them in such situation which can make them fall victims of baby factories’ operators who are ready to give them money to buy their babies.

Sharing similar sentiment, a social worker, Mr Bola Odunayo, urged the three arms of government to make Child Adoption Law easy for people who are genuinely in need of babies. ” Child Adoption Laws should be more flexible and affordable to enable couples who genuinely want to adopt children do so without much rigour and financial pain. The rising baby factories in the country is because people especially childless couples are patronizing them. Most of them are tired of the stringent conditions attached to child adoption by different levels of government before resulting to baby factories. Government, should find ways of making child adoption easy. This will reduce the ugly menace of baby factories in the country to its bearest minimum.”

Also describing the act of baby factories as evil, a public servant, Mr Timmy Babafemi, said that the law of the land on baby fostering and adoption is sacrosanct and must be complied with by anybody setting up a motherless baby home in the country. He called on the National Agency for the Prohibition of Traffic in Persons and other related matters to get more involved to find a lasting solution to what he described as barbaric.

His words,” The Child Right Act in the country prohibits anybody to buy, sell, hire or obtain possession or otherwise deal in child selling  and that anyone who contravenes the law shall be liable on conviction to imprisonment for a term of the years. All relevant laws relating to child trafficking should be vigorously enforced and perpetrators should be made to face the full wrath of the law. In this regard, all Law Enforcement Agencies should work in synergy with the National Agency for the Prohibition of Trafficking In Persons (NAPTIP) in policing the society through effective intelligence gathering.”

The woman in addition advised government to make use of the mass media to sensitise the society against involving themselves in the evil act of baby factories and encourage them to expose anyone involved in it. ”Laws establishing maternity and orphanage homes should be revisited, so that, only those who are qualified can be given license to operate.”

In the contribution of a parent, Mrs Peace Kennedy maintained that baby factories cannot be tackled if the economic situation in the country remain the same. The woman noted that most of the ladies who were lured into baby factories businesses embraced it because they needed  money to keep body and soul together.

Her words,” I came from the eastern part of the country where baby factories have become the order of the day. Young ladies were recruited into the evil act because they were promised money they considered huge. Just imagine promising a local poor girl N100,000, she will quickly jump at such offers because the economy is bad. Let the Federal Government improve on the economy, most of these ladies will get something doing and be able to cater for themselves.”