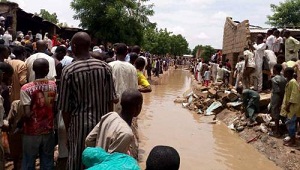 By Josephine Oguntoyinbo
|
Following the recent flooding of major towns  in Ondo State, the state House of Assembly has expressed displeasure with the response of the agencies saddled with the responsibility.

Akinribido ,who alleged SEMA of not functioning as expected ,said flooding  have wrecked havocs in many places in the state, most especially in Ondo town which claimed lives and destroyed properties.

Also,another member of the committee, Mrs Favour Tomomewo said the agency was put in place to affect  people’s lives  at the  grassroots whenever the need be and not leaving them dying and suffering from loss of properties .

Tomomewo therefore called the agency to be conversant with the people at the grassroots, emphasising that they should  send their agents to the 18 local government areas of the state to ascertain how they are coping with the challenges.

Responding, the Permanent Secretary of the Agency,Mrs Adesola Alabi noted that the agency is not aware of most of the disasters recorded, adding that some of the incidence are not the duty of SEMAs but the Ministry  of Works and Environment.

According to her, SEMA is to notify the National Emergency Management Agency (NEMA)  of any natural or other disasters and carry out any disaster management activities in the state.

Mrs Alabi added that SEMA under the supervision of the deputy governor has the responsibility of ensuring functional and local emergency management committee in all the local government areas of the state and synergise with the relevant stakeholders in disaster management.

She therefore called on the lawmakers to consider the bill establishing a full fledge SEMA into law in the state, noting that the agency will continue to do it’s  best to achieve the set goal.

The committee also visited the Agency for the Control of AIDS (ODSACA),where the Coordinator, Dr Adegbulu briefed the lawmakers about the spread of HIV/AIDS in the country. He however said that the agency was working to bring the virus to the barest minimum  in the state.

The Vice Chairman of the Committee, Mr Sunday Olajide while reacting to the effort of the agency, urged them to embark on  massive sensitisation and publicity in the media to educate the masses  more on the ugly trend .

Also, Mrs Tomomewo who charged  the agency to intensify their effort called for the review of hotel activities in the state and  provide condoms to hotel rooms.

The lawmakers later called on the agency to include them in its international team, promising to assist the agency at all times.