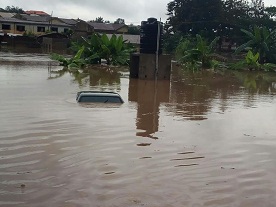 From Fisayo Akinduro, Osogbo
|
Residents of Ibokun in Obokun Local Government Area of Osun State, have called on the state government to save them from being totally displaced as many of them have abandoned their homes due to severe flooding.

It was learnt that rampaging flood had destroyed properties worth million of naira during the heavy downpour on Tuesday.

Recall that the Nigeria Hydrological Services Agency (NIHSA) warned that there is a high probability that a total of 74 Local Government Areas across the country will witness high flood risk when the rainy season begins in full this year.

The agency further said all the 36 states of the federation including the Federal Capital Territory are expected to experience different levels of flooding with Osun, Lagos, Benue, Oyo, Cross River, Sokoto, Plateau, Abia, Edo listed as states highly to experience flooding.

Recent incessant down pour in the state apparently overwhelmed the capacity of the bridge on Olooyo river along Ipetu Ile-Ibokun road, thereby making the water to over flood its bank and surroundings.

Passing the flooded road has been an herculean task for the residents, motorists and motorcyclists plying the route.

The flood also seem to have damaged goods inside the nearby house and mosque as well as submerging the farmland around the mosque.

The route is especially strategic to the economy development of the state as it connects Ikirun, Iragbiji, Ipetu, Ibokun, Esa-Oke, Ijebujesa, Ilesa up to Ondo, Ekiti, Kogi states and the Federal Capital Territory.

During his assessment tour to the area, the parliamentarian representing Obokun Constituency in the State House of Assembly, Honourable Adewumi Adeyemi, commended the state government for efforts demonstrated at taming flooding in the past through channelisation of rivers across the state.

Adeyemi therefore appealed to Governor Gboyega Oyetola to assist the area through emergency response to ease off the flooded rivers.

One of the residents, who spoke to newsmen, Imam Tirimisiyu Adenitan recalled that it is the first time the river over flooded its bank, implored the state government to come to the aid of the residents who experienced losses as a result of the flooding.

Another residents, Mrs Idowu Sarah appealed to the state government to expand the bridge so that it can accommodate the volume of water which runs through the area during wet season and construct more drainages and channels to ease the flow of water.