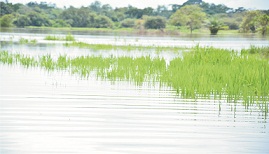 By Josephine Oguntoyinbo, Kemi Olatunde, Kehinde Oluwatayo &Jimoh Ahmed, Ikare
|
Over 600 hectares of rice farms in Uso/Ogbese axis of Ondo state have been submerged as a result of torrential rain in the last 10 days.

Majority of the farmers who are under the aegis of Federated FADAMA Rice Association in Uso/Ogbese said they could no longer access their farms as the entire areas have been flooded.

Lamenting the loss, one of the coordinators of the group, Pastor Olayinka Labiran said 373 farmers cultivated the farms with each having at least one hectare.

He added that the farmers took loans under the Federal Government/CBN Anchor Borrowers scheme through the Bank of Agriculture.

Labiran disclosed that the affected farmers are mourning because of the loss.  He stressed that even the swampy area in the farm had never experienced such.

When asked if there was hope of salvaging the farms, Labiran said the place has been completely submerged by flood which has not receded for four days.

While saying the loan was insured, Labiran called on the state and federal governments and particularly the insurance company to visit the farms, saying they cannot calculate their loss until the water receded.

Describing the loss as a monumental one, the coordinator of Asolo rice farm in Uso, Mr Oluwafemi Ibikunle noted that nothing less than four thousand tonnes of rice would have been harvested from the Uso farm.

Coordinator of Elfash group, Mr Toyin Fasakin noted that the 78 farmers under him cultivated minimum of three hectares, lamenting that they have been submerged.

A female rice farmer in Mile 140, Mrs Dupe Kelly who said she cultivated 3.5 hectares six weeks ago said that she could not enter her farm since four days.

Victims of the flooding have appealed to government and relevant agencies to urgently come to their aid, saying the incidence has rendered them homeless and jobless.

It would be recalled that properties worth millions of naira and several houses were destroyed during the early downpour which wrecked havoc in the council area at the weekend.

A 91-year-old, Festus Olamiti, one of the victims pleaded with the government to come to his aid. He lamented that his house of over seven decades had been destroyed by the flood.

Another victim, Mr Taye Akinyemi, a retiree lamented that he had invested all his savings in his fish pond business, regretting that everything had been destroyed by the flood.

Another victim who identified herself as Bolatito who was in tears, narrated that she was left with nothing except the cloth on her.

A retired teacher who was also affected by the flood narrated that all he had worked for in his entire life were gone as the flood demolished his only house and his business center.

In an interview with the lawmaker representing Idanre state constituency, Mr Festus Akingbaso expressed fear, claiming that such devastating flood has never been experienced in the history of the town.

According to him, he mobilised to assist the victims immediately he received a call about the incident.

Akingbaso explained that some of the victims who are now internally displaced were temporarily taking shelter in his house.

He advised people living along the bank of rivers to vacate without delay and relocate to more secured areas of the town, adding that residents should also stop dropping refuse in drainages.

The lawmaker equally called on well-meaning Nigerians to assist the affected victims by offering temporary shelter, food, utensils and other materials.

He assured the affected victims that their plights would be channeled to the appropriate authorities for solution.

The Chairman of Idanre local government council area, Mr Jerome Akinsuyi explained that he was devastated by the level of destruction the flood caused the people of the area.

He assured that the local government authority will assist the victims in its little way and called on the state government and the Federal Emergency Management Agency to come to their aid.

Also in Ikare and Oka-Akoko,  many houses and roads have been washed off by erosion resulting from flooding.

At Ikare, many houses have collapsed due to erosion while many township roads have become impassable or cut off.

Roads from Okoja to Osele High School; Ikado to Agolo High School and Okoja, Ikun to Awara dam just to mention a few are in deplorable condition due to erosion.

At Oka Akoko, roads leading to Iwonrin, Ikese and part of Ibaka have been washed away by erosion.

Two indigenes of the  towns, Mr Lawal Obaalejo from Oka Akoko and Mr James Oladetohun from Ikare Akoko commended the Ondo State Governor, Arakunrin Oluwarotimi Akeredolu,  for his efforts in the area of road construction across the state.

The duo posited that considering the level of erosion ravaging the towns, it is becoming increasingly too much a burden for a state with a lean purse to single handedly tackle the ecological problem.

They therefore appealed to Governor Akeredolu to draw the attention of the Federal government to the impending doom facing the two towns as a result of devastating effects of flooding in the area which according to them could only be fought by declaring the towns ecological disaster zone.

Speaking with The Hope, Permanent Secretary, Ministry of Environment,  Tayo Adeniyi stated that government had planned ahead the rainy season by putting in place measures to minimise the effects of flooding.

He explained that the earlier flood prediction by relevant authority had put government on its feet to ensure it cushion its effects on people of the state.

According to him, government has ensured that desilting of major rivers drainage were put in place before now stating that “major areas of the state were not flooded because the government had taken some proactive measures during the dry season.

While speaking further, he described the level of flooding experienced in some areas in the state as flash flooding which according to him was caused by building along river banks and dumping of waste along river courses among others.

Allaying the fears of residents of the state, he assured that steps were being taken to have flooding curtailed saying “machines are working; swamp buggy is working in all parts of the state. We have worked in First Bank area in Akure, Aponmu and we are working in Oba Ile now.”

While noting that there has been more rain due to climate change, he appealed to the people to desist from illegal dumping of wastes especially in river courses and added that they should not build along river channels.

He charged them.on the need to keep their properties safe and advised that they don’t engage in land filling in order to avoid the prevention of natural flow of water.