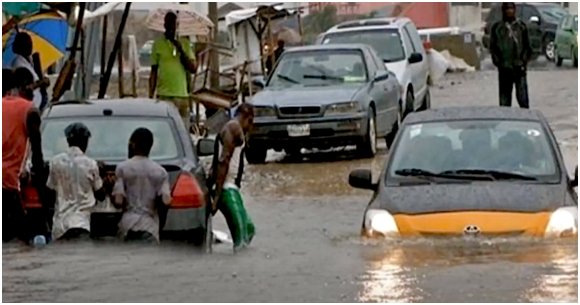 There are indications that the price of rice may continue to skyrocket following massive destruction of rice farms by floods across the country.

This is coming just as the prices of the product continue soar as a bag of local rice has shot up to N38,000 while  imported rice now sells for N47,000.

The farmers who spoke with The Hope yesterday, lamented bitterly that there may not be  an end in sight to  the rising cost of food items particularly, rice, as  damage done by flood may hinder them from producing enough this year. They said they have lost  all their investments  to the disaster running into several million of naira.

The Hope investigation also showed that the flood affected other agricultural products such as  fish and tomatoes among  others.

The Chairman of Rice Farmers Association of Nigeria, RIFAN in Ondo state, Mr, Emmanuel Bukola in an interview with The Hope  said the flood experienced  in many farms in the State  has swept off the rice farms at Ogbese, Araromi, Army Barracks and in Ile- Oluji areas.

He described Ogbese as the  worst  hit,  saying he had lost all he invested in rice production.

” If I want to quantify what I have lost to the flood apart from other farmers, it is more than N400, 000 and there are  average of 100 farmers in each of these towns who have lost between N550, 000 and N1million, each at their various farms. You will discover that millions of naira have gone down the drain”

” The truth is that we may not be able to harvest up to a ton of rice in the whole of  Ondo state this year and we must be prepared to face food shortage  and to buy rice at a very high price.

‘The cost of a bag of imported rice at N47,000  is  heartbreaking, but the situation will grow worse when there is little or none to be harvested in the state,” he lamented.

He stated that flooding cannot but occur when there is incessant rainfall, but government should be rendering assistance to farmers.

According to him, flood has been affecting production in the affected areas for over three years consecutively now, the farmers could not boast of just a ton of rice in those areas for the past three years.

They have not got any help but have been doing individual struggle.

“Only this year, I cannot quantify the amount of debt I have incurred. Rice farmers are not happy at all because we are all in debt and at a crossroads,” he lamented.

He said they were  only thankful that the number of fish farmers  affected this year were not as last year which he described as a catastrophe.

He said the flood was minimal because they had advised farmers to channel the flooded areas and to monitor them while the farmers in the prone areas were asked to move away.

He applauded the government for providing  an excavator to clear the banks of the rivers, but appealed that more areas needed, to be touched.

He, however, stated that the farmers have applied  for an excavator to complete other areas but were still waiting for government reaction.

He appealed to  government for help to channel the areas which are prone to flooding to avoid previous years experience.

Also, tomatoes farmers have narrated their ugly experience from the incessant rainfall which affected their farms.

A tomato farmer at Irese, in Ifedore Local Government area of the state, Mr Dauda Bashir said continuous rainfall caused fungi infection on their crops and when such happens, the only solution is to spray the tomatoes plantation with fungi chemicals at an interval of three days.

The spraying, according to him is a challenge to many farmers who are not capable of doing so due to financial problem.

“This also accounted for why the price of tomatoes will continue to soar because prices of the various chemicals used in mitigating the effects of the fungi infections are also on the rise,” he said.

“Human beings can never be satisfied like Oliver Twist, they will always ask for more. Most farmers are not getting help from government.

” It is only those who are closer to the government that benefit from the various interventions,” he alleged.

According to him, the best thing is that government should make extra efforts to  ensure  real farmers  have access to government’s supports, saying the gesture would guarantee more food for the people of the state.