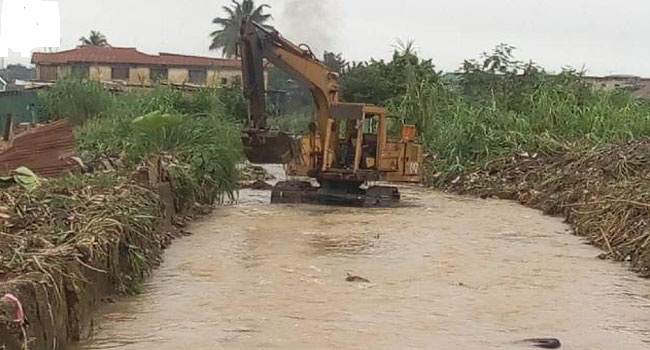 As part of efforts to prevent incessant flooding, Osun State government has commenced the dredging of streams and waterways in 25 local government areas of the  state.

Special Adviser to the Governor on Sanitation And Environment, Rufus Oyegbile disclosed this while flagging off the dredging exercise in Edunabon, a town in Ife North local government.

Oyegbile said the dredging exercise would be carried out on major streams and mini rivers that  were prone to incidents of flooding across the state.

He also stated that the exercise was a proactive measure preparatory to rainy season when incidents of flooding were experienced.

Oyegbile disclosed that the dredging was being done by the State Government in collaboration with the State chapter of Association of Local Government of Nigeria (ALGON).

He noted that  Olumesi stream dredging in Edunabon was the fourth to be executed by the government.

The lawmaker representing Edunabon State Constituency in  the House of Assembly, Olatunde Olatunji said the fact that the flag off took place in Edunabon shows that the Governor placed so much value on his constituency and the state at large.

He added that the Governor has made his job as a representative of the people of his constituency easier for him in facilitating development and life impacting projects to the area.

“Being a government that is responsible and responsive, and want life to be bearable for the people is why Governor Gboyega Oyetola is embarking on such a project like this. We can see that most of the property along this waterways have been abandoned.

“The last time a project like this was done is almost a decade, so I’m excited that today we are witnessing the dredging of Olumisi river, and once it is completed, I’m sure things will return to normalcy and people can reclaim the property they have abandoned and it will have ripple effect on the economy of the area.

The Osun State chairman of ALGON, Samuel Idowu said “this dredging happens to be the 4th in the series and it is targeted towards eradicating flooding in the entire state. It is in preparation towards avoiding flood when the rainy season comes. So, it is a good development and the people must give kudos the the Governor.