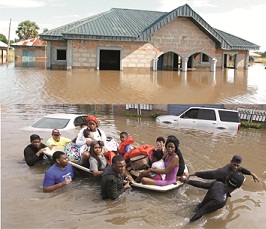 By Theo Adebowale
|
Nigerian meteorologists predicted that there would be rains, rivers overflowing their banks, and much flooding in 2019.  The predictions were made in 2018 and official releases were so precise, so sure.  One began to ask when such predictions bordering on geography was so scientific, not likely.” There was enough time to cooperate, plan to avoid or minimize disasters.  Lo and behold, the rains came with the floods; river banks were flung away, lives and property in great volume, were lost and are still being lost.  Imagine rice plantations on hundreds of hectares of land wasted away just like that, school children have been washed away.  So were travelers.

Many schools were submerged in the flood.  Parents and teachers looked for temporary shelters to carry on teaching.  Some other parts were fooled when they resorted to self help to raise funds to salvage school buildings. In Delta State was ‘obstinate’ Success who volunteered to receive strokes of the cane regularly provided she would not be excluded from class.  Her headmistress was not as lucky.  She was transferred promptly and suspended.  Trust officials of the disaster management agency, it may have been a year of accelerated promotion.  There were no reports on movement of inmates to internally displaced persons camps as a result of floods.  But cholera, diarrhea, and other water borne diseases must have claimed a great number as casualties.

This year, the Peoples Democratic Party recorded great losses in strategies, logistics and ambition.  With the benefit of its glorious days when it was in the habit of winning elections, the party designed an elaborate plot to recover power.  Adopting the latest strategies in networking, surveillance, communication methods, and the party coordinated members and sympathizers in parliament, executive arms of government and the Judicature.  Meetings and training workshops were organised to brief, debrief, train and upgrade knowledge to go about canvassing votes, electioneering including voting and collation.  Party officials were trained ahead on how to identify or make claims of electoral offences.

They were trained to ensure synergy in making statements, intimidating members of other parties, responding to interrogation and making it easy for making statements acceptable as credible.  By the time the Chief Justice of Nigeria was suspended and removed from office, the party could not bear the great loss that had befallen it.  Presidential election campaign was suspended immediately and indefinitely. Official statement of the party was a lamentation of irreversible loss rather than a condemnation of an official action.  The server option was to crash as well, just like the certificate or non-qualification of Mr President did not fly.  It was a great loss.  All Progressives Congress contested and won the presidency.  But it also incurred losses.  It had forfeited the confidence people felt for it four years earlier.  There was a disconnect between leaders and followers in the party as they worked at cross purposes.  Many of those in leadership positions do not recongnise enormity of responsibility, or treat members of their party as members of opposition.  Gluttony, avarice, greed and childish arrogance are too obvious.  Surrounded by a few lively youths, their party leaders enjoy phony promotion in the social media while meetings do not hold at unit, ward or council levels.

They have confidence in vote-buying which saves them from explaining government policies to unfortunate party members or being asked by party caucuses to adopt formulas for contract award, projects execution or recruitment. Some politicians also lose their appointments.  Individuals easily lose appointments because they do not understand the nature of the presidential system of government as different from parliamentary!  And these losses were not peculiar to Nigeria or the presidential system of government.  The European Union has faced the reality of imminent loss of the United Kingdom to Brexit.  Office of the British Prime Minister has recorded losses.  Johnson Yelson, the incumbent is standing on shaky grounds.  Even Donald Trump, the American President with all his personal wealth, family discipline and meticulous attention to legal details has recorded losses in recent times as he undergoes impeachment trial.  He must have lost some weight as efforts are made to show he shares some qualities with African politicians he dislikes passionately.  Donald may use official resources to undo a political opponent, and he may lie about it.  There are losses at different levels within and without Nigeria.

There are also victories.  In Bayelsa State,  Governor Dickson anointed an aspirant as successor and promoted him for the office in electioneering, consultation and carnivals.  Even the courts were approached to clear the coast for him.  In spite of all efforts, that candidate lost.  Twenty years of PDP governorship in Bayelsa is now winding down.  Politics in the creeks before the election became very interesting as old alliances were dissolved, new ones were built.  Otherwise incompatible politicians became bedmates, PDP stalwarts campaigned gloriously for the APC opponents.  It was time for victory for APC and Lyon in Bayelsa.  Those of them who had victory particularly this year in spite of stiff opposition know what it means.

All Progressives Congress wasted so much time on bickering, internal quarrels, rivalries, unnecessary squabbles instead of building on public trust and acceptance.  By the time it was at the polls for presidential election, self destruction had ravaged it so much.  But for concerted efforts of the national team and credibility of candidate, and the liability of the closest contender, it could have been more threatening.  And the other contestants? They should check the fate of APC, and candidates in Rivers and Zamfara.  Governor Yahayah Bello of Kogi is into so much controversy.  Civil servants complained about the backlog of salaries in spite of bail outs from the Federal Government.  He also demonstrates some trait of intolerance from how a female gubernatorial candidate Natasha was prevented from attending the peace meeting where Inspector General of Police was present did not in any way promote Kogi Governor.  Yet he was able to put in place a working arrangement that delivered victory to him.  He must no doubt be savoring that victory now.

We must ask the Nigerian politician, victory at what cost?  Governor Dickson announced the figures in Beyelsa.  But in Kogi the picture was graphic and gory.  Monday after the election, PDP woman leader was alleged to have been doused with Premium Motor Spirit (PMS), forcibly led home and set ablaze.  It was to say the least barbaric, shameful and inhuman.  Was it intended to demonstrate dislike for a two-party democracy or promote a one-party state?  Was it to tell the women that they should keep off politics?  We must all in one accord condemn this despicable action.

Under the leadership of Chief Security Officer for Kogi State, all politicians without exception must identify and give evidence against these blood thirsty murderers for the law to deal with them sternly and summarily.  It will be a better place if Nigerians could easily state their preferences and carry on with life until when next another opportunity comes.  We must demonstrate that no man’s ambition is worth the blood of another.

It is important for us to begin to protect lives and property of our fellow men from the floods, inhumanity and all forms of wickedness.