For one meat, Opeyemi goes to jail 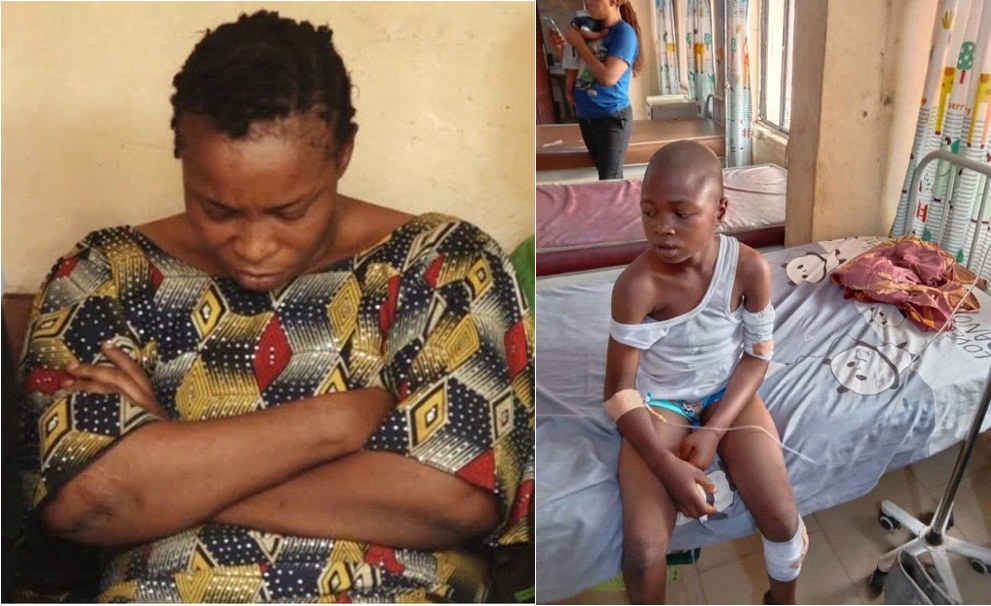 The atmosphere was cloudy and the wind blowing, telling of something strange to happen, but Mrs. Opeyemi Omoyemi, knew not that the blowing wind and eerie midnight were warning her to be cool and never fight against her Maker.

While the whole Africa and Africans were glued to their television sets preparing for the final showdown between Senegal and Egypt in the Africa Cup of Nations tournament on February 6, 2022, Opeyemi dashed home to count the meat in her pot of soup. Suddenly she realised that one piece of meat, the juiciest out of all the meats in was missing.

Hell was left loose as Opeyemi dashed in furiously and, like a person possessed, left her two children for she believed that they were not meat their.  She pounced on her house help identified as Joel Sunday, beating him blue and black.

Despite the boy crying for mercy and calling for neighbours’ help, the spirit that took possession of Mrs Opeyemi would not budge. Not satisfied with the first beating, the spirit took hold of her and asked her to look for razor blade to make patterns on the little boy’s body.

This she did and blood gushed out of Joel’s body as he wept uncontrollably. As blood was oozing out of little Joel’s body and his life gradually eebed  away, the neighbours, knowing if the boy died in the house they would not be spared by the police, quickly and quietly called the police. Pronto they came to whisk Madam Opeyemi away to their station and the little boy in pain was rushed to Police Hospital for medical attention.

There was uproar in the town as people wanted to see the culprit who did such a dastardly act. In government circles too, the state has passed a law prohibiting harmful acts against persons in the state.

The 36 years old Mrs. Opeyemi Omoyemi was therefore dragged before an Akure Magistrate Court and she was sentenced to four and a half years imprisonment for inflicting heavy body injuries on his 12-year-old house help identified as Joel Sunday.

Omoyemi was arraigned on a five-count charge of attempted murder, child abuse and violence against persons prohibition among others.

The defendant was said to have used stick and razor blade to inflict multiple injuries on the body of the house help whom she accused of stealing pieces of meat from her pot of soup.

Delivering her Judgement, Chief Magistrate Olufunmilayo Edwin sentenced the defendant to three and half years on the first count charge of grievous harm she inflicted on the victim in the viral video.

The defendant was also sentenced to one year imprisonment on count five.

The defendant at the last sitting had pleaded guilty to three of the charges leveled against her.

Before the Chief Magistrate delivered the judgement, counsel to the defendant, Foluso Kayode, had asked the court to be lenient with his client.

He added that his client was a first offender, stressing that she had not been arrested for any inhuman behaviour before now.

The magistrate also ruled that the defendant should appear in court in April 13 on count four bordering on human trafficking.

Meanwhile, the wife of Ondo State Governor, Mrs. Betty Akeredolu, has hailed the judiciary over the judgement with a pledge to continue throwing her weight behind the advocacy for the protection of the rights of women and children.

Mrs. Akeredolu, who said the judgement would serve as deterrence to others, described the action of the convicted woman as criminal and highly unacceptable, while she called on parents to be vigilant and monitor the activities of their children to prevent abuses by those entrusted to care for them.

“It is dangerous to leave your child with people you can’t trust.  Be more vigilant and report any case of molestation to relevant agencies.  Let’s work together to stamp out this and protect our children,” she said.

Mrs. Akeredolu promised to discuss with government agencies and individuals who are ready to partner with the government to support these children to have access to education, shelter and good food, saying they are the future of tomorrow.

While speaking, the father of the victim, Danladi Yahi from Kebbi State, explained that he released his two children to a pastor because of the Boko Haram insurgency in Kebbi State which affected his children’s education.

“I released them because I wanted them to be educated and not to get killed by Boko Haram. Schools had been closed down and I don’t want them to be uneducated like me.  So I sent them down to an area which is peaceful.

“But I was surprised and disappointed to learn about the development. The woman who promised to always allow them to come for Christmas holiday ceased to pick our calls and never heard from her again until the incident happened.

“The police called us in Kebbi to inform us and we rushed down to meet the children who were with the police. It is disheartening that what we ran from in the North was what we met in the South. However, I must appreciate the judiciary and the state government,” he said.

Also speaking shortly after the court proceeding, Catherine Ogunjebi, who held brief for International Federation of Women Lawyers (FIDA), Ondo State chapter, said: “We are grateful that justice has been served to the victim and for the society. We are also grateful for the time that the defendant did not waste. She pleaded guilty and it was faster for us to  arrive at this conclusion.

“We are equally impressed because it is not a long sentence. She will be reunited with her children in due course, as we know she also has children who are now in the custody of Women Affairs at the Children’s Home for proper care.

“It is wrong for her to have had two children, 12 years and 10 years in her custody for the purpose of domestic help. This is against the Child Right Law of Ondo State and Child Right Act 2003 of Nigeria.”