Home News For the eyes and ears of Governor Fayemi 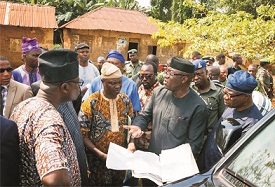 For the eyes and ears of Governor Fayemi

By Bayo Fasunwon
|
Once in every clan, tribe and tongues, a head is raised up at par, but above others as a primus inter pares. This man stands like Saul, head and shoulders above others. Unfortunately, the spoils and euphoria of office blindfolds many such a man. When position obscures vision, then benefits overrides responsibilities and the purpose of elevation is lost. I know that Governor Kayode Fayemi, the Chairman of the Nigeria’s Governors Forum is not numbered amongst such disillusioned men. To this end, I write for the eyes of a man aware of responsibilities in a society of mortals crying just for crumbs that falls from the tables of the elect, but are getting none. This is an appeal from the man, whose dwellings is among the struggling and impoverished ‘hewers of wood and fetchers of water’ in the Nigerian society.

My joy in the emergence of Governor Kayode Fayemi stems from the fact that he is not new to public governance. Providence has given him the opportunity to serve the public as a man of authority at the State, National and International levels. He with his ‘cutlass and torch’ in hand rules over a state that earns more little than others from the national purse, whose people have been thrown into darkness by power withholding local imperialists, and are therefore not immune to poverty and stress. His duty, which he has taken with gusto, is to bring these people from darkness to light, poverty to wealth and from obscurity to limelight. These people over whom he is elected to bear rule, is a microcosm of those over whom his party were more favoured to bear rule and take to the ‘Next Level’ at the national level. Therefore, the Chairman of those elected to carry out this civic duty at the 36 States of the Federation is not unaware of the sufferings and alienation of the people who had trusted them with power for their emancipation and transformation. He is well aware.

Mr. Governor of Governors, I ponder that this is a good time to appeal to you to appeal to other governors. As at today, many of your elected colleagues can heave a huge sigh of relief as the election tribunals have upheld their elections. Now they can focus on governing. Now is also the best time, because the ruling party has assurance that the saddle belongs to them at the national level given the victory of the President at the election tribunal too. Now, is the best time to write because Nigerians would want results and no excuse.  One writes at this time because your influence soars and your leadership at the Governors’ Forum is respected and accepted; hence a better time than now would be a waste of opportunity and carelessness. With the preciousness of this time, and the tough times ahead, one writes to make demands from your respected association of able, sane, patriotic and credible leaders in power.

Being aware of the abject poverty, unemployment, mental torture, dilapidated infrastructures, and despair and seeming hopelessness in the land, I appeal sir that you appeal to other Governors not to enact policies that would make life more difficult for the people under them. The appeal is that the power entrusted in their hands should be used for the emancipation of the electorates, and not for vengeance and retributions against perceived political adversaries. War, in every form, blinds the eyes, blurs the mind and is set on destruction rather than development. When a Governor serves his people, his people would fight for him. Let none of your members dissipate their energies and the State resources in waging war against mortals, who if not fought against cannot exist forever. Rather, let them invest in the people, build infrastructures, schools and create enabling environments where the bold, the brave, the industrious and dedicated of men can legally strive and thrive for him and many that hold tightly to the hem of their garments for survival.

Rather than Governors fighting amongst themselves, and promoting deaths and distress amongst their people, the time has come for Governors to cooperate with one another for the benefit of their people. This you must pursue vigorously. Operating under the laws of comparative advantage, States can learn to develop their areas of strength and cooperate with other States in a symbiotic relationship that would reduce the sufferings of Nigerians. While some States are well suited for agriculture, some are well positioned for manufacturing sector while others are good environments for commerce and education. It is time for Governors at your forum to go back and relate well with the academic institutions of their States for discoveries. Now is the time sir, when Governors have to sponsor researches that are State based with the intent of knowing what their Comparative Advantage is and thus exploit it profitably. These researches would also avail the Governors the needed information on the realities of their State, and that would enable them to discover the best State to cooperate with in investments that would be mutually beneficial. Armed with this knowledge, then Governors, and in event States can create a synergy that would engender development, integration and relief for the governed. It is common for Governors in Nigeria to exhibit their ‘success’ at signing bilateral agreements with foreign firms and countries, which unfortunately mostly ends in catastrophes and avoidable indebtedness. My dear Governor, the partnership many of your colleagues seek is starring them in the eye at home. The time has come to look inwards. It is important to note that partnership in Commerce would also engender security partnership.

I also appeal that conscious and concerted efforts should be put in place to reduce poverty and unemployment. When poverty and unemployment takes a bow, insecurity would take a flight. Many schools in Nigeria lack teachers, and there are many qualified teachers, unemployed living in redundant despondency. When these are employed, they would employ people in the informal sector. Associated with unemployment is the promotion of poverty through the nonchalant attitude towards the prompt payment of salaries. It is time that you make it clear to your friends and other constituted authorities that salary payment is a duty and not an achievement. As long as workers’ productivity is the bases for the income that accrues to the State, then duty demands that those who generate the funds made available for Governors to allocate must be paid at the end of every month. Not only them, but those who mortgaged their personal desires and ambitions and opted to work for government and are now retired must not be left to rot and die, gnashing their teeth, and biting their fingers in regret that they did not sabotage and steal the government dry, when they could have successfully done so. Please, let our Governors know that the labourers deserve their wages in time.

Finally, let it be known that some Governors are far from those they govern. True democracy insists that people should participate in governance. To this end, appeal and ensure that all State Governors do not destroy the closest government to the people – the Local Government. In your time, let it be said that all Local Governments in Nigeria are governed by democratically elected executives and legislators.

Sir, work towards the implementation of these few things, and later other areas would be explored. God bless you, God bless the Governors, God bless the leaders of, and the Federal Government of Nigeria.