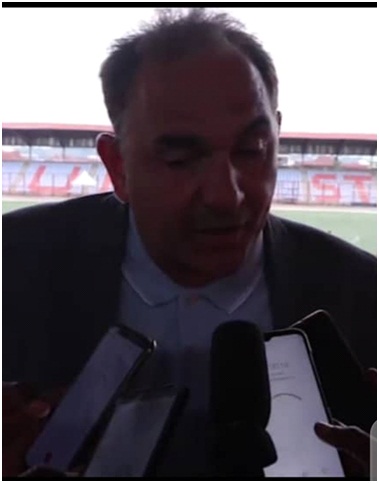 Eight out of eleven Sunshine Stars players were excellent, three are a bit below against Dakkada FC, says foreign football scout, Basil Kabbani.
He said that is what you need in football, if eight are performing ,you are going to win the game.
Kabbani stated this while analysing and assessing the performance of Sunshine Stars after their triumph over their opponent from Delta State.
He commended the sunshine Stars players’ resilience, saying they perform fantastically as a team.
“I really enjoyed the game; thank you to Barr. Owanikin (President of Mandot FC), thank you to Ude Sports, thank you to the Deputy Governor (Hon. Lucky Aiyedatiwa) and thank you to Sunshine Stars for inviting me to the NPFL; it was a fantastic performance from the team. I was surprised at the level of commitment from Sunshine; good action, good energy, good technique, and they deserved the win. The standard is what I expected, I enjoyed the game and the hospitality has been great. I love the NPFL”
Kabbani said: the team should improve on how to build their attack from the right and left wings, the two center back played very well, the number 12 is my man of the match,I don’t know his name, the defensive midfielder, he ran the game well. The center back had a great game .
He said”Technology is the future, you can benchmark and look where you are comparing to one month, two months, three months’ time. So we brought here first VEO camera, first catapult technology with GPS tracking and 360Player app that help you analyse all that information. Unique in Nigeria, so we are looking forward to seeing what the reactions will be, the boys have been using it in the scouting mission from Mandot Soccer Stars and they love it. We have got absolutely 100% brilliant, quality videos not seen in Nigeria before, that’s definitely going to be the future.
He added: “Data analysis and recruitment is now done via data. So it’s not just down to the emotion of the coach; across Europe and the world you check with data, yes you still got the human eyes to check what’s going on but you back it up with data. It can also raise the profile of the NPFL to selling players and make it worldwide, more coverage and more sponsorship. So I think if we introduce it to the NPFL and across Nigeria in five years time it will be the best thing ever did”