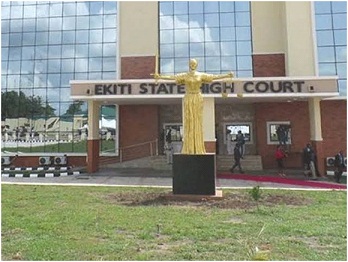 An Ado-Ekiti High Court has sentenced a clergy, Rt. Rev. Ebenezer Adereti and one Chief Joseph Akinyede, to three years imprisonment each  over forgery, conspiracy and other offences.

The presiding judge, Justice Lekan Ogunmoye, who handed down the sentences, held that the prosecution had proven the offence of conspiracy against the defendants beyond reasonable doubt.

The defendants were arraigned before the court  on October 18, 2021 on four count charges bordering on conspiracy, forgery, false sworn declaration and making document without authority.

According to the charge, Chief Joseph Akinyede, 68  and Rt. Rev.  Ebenezer Adereti, 63, on January 10, 2016 at Ilado Street, Iwore, Ifaki Ekiti, within the jurisdiction of the Court, conspired to forge the minutes of meeting of the Registered Trustees of the United Church of Cherubim and Seraphim Organization.

They were also said to have made false declarations, which led to their being appointed as members of the Registered Trustees of the United Church of Cherubim and Seraphim Organization.

The duo, were  also alleged of  amending the constitution of the Registered Trustees of the Church without lawful authority.

In the Police First Information Report, one of the Trustees, Faseyi Albert said, “I was appointed alongside others as the Board of Trustees of the Church in 2001. The appointment was sent to the Corporate Affairs Commission for ratification.

“After the demise of Primates and Archbishop of the Church, Most Rev. S.A. Fadeyi, the Bishop-in—Council consequently ratified the appointment of Rt. Rev. Tunde Ogunseemi as the new Primate/Archbishop of the organization in 2015.

“During the manual search conducted by Corporate Affairs Commission, it was discovered that Rt. Rev. Ebenezer Adereti, who was Archbishop 3 of the Church and Chief Joseph Akinyede had manipulated some documents which indicated that the trustees had a meeting and decision was taken to remove Most Rev. Tunde Ogunseemi’s name, while minutes of same meeting was forged among others and presented to Corporate Affairs Commission , and  also presented it at the meeting.

“The matter was later reported to the Police for investigation and action.”

To prove his case, the prosecutor, Gbemiga Adaramola called five witnesses and tendered  some exhibits, which included; petitions to the Corporate Affairs Commission, Relieve of appointment letter, Extracts from the meeting, letter from Conference of General Secretaries to the Archbishops, statement of the defendants among others as exhibits.

The defendants spoke in their own defence, through their counsel, Ayotunde Ibitoye, who pleaded with the court to temper justice with mercy. He called four witnesses.

In his judgment, Justice Lekan Ogunmoye held, “There is an overwhelming evidence before the court that the defendants conspired to forge the signatures of the Board of Trustees member and minutes of meeting of the Registered Trustees of the United Church of Cherubim and Seraphim Organization.

“The offence of conspiracy had, therefore, been proved beyond reasonable doubt against the defendants. In all, the sole issue for determination is resolved partly in favor of the prosecutor.

“Consequently, the defendants are sentenced to one year imprisonment each on counts one, two and four with an option of N20, 000 fine, in each of the counts.

She said the  sentences are to run concurrently.

The judge, however, discharged and acquitted the convicts on count three of making false declarations.